Toshiba's ultraportable Sandy Bridge laptop has finally arrived. Is its low weight worth its high cost? Read our review to find out. 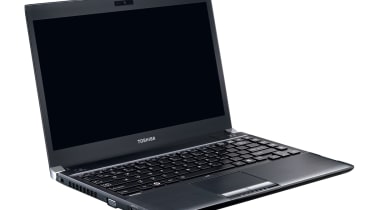 If you're not ready to invest in USB3, the port is backwards compatible with USB2 and there are two other USB2 ports, one of which doubles as an eSATA connector. Some of the ports are quite tightly spaced, which could them easy to foul with a bulky cable or USB flash drive. A separate connector for a port replicator can be found on the bottom of the laptop.

We initially thought typing on the R830 would be a pain due to the smooth, slippery texture of the seemingly small, undersized keys. However, in practice typing was comfortable and generally accurate thanks to the keys' responsive feedback. The keys were still a bit springier than we would like, punctuation and other special symbols were still a little trickier to type accurately, and the smallish keys may not suit those with large fingers.

The shiny touchpad similarly felt slippery but were actually responsive and comfortable to use. We also liked the large, accurate and responsive touchpad. The basic range of multitouch gestures won't impress anyone used to a modern touchscreen smartphone or tablet though.

Security conscious users will appreciate the fingerprint reader nestled in between the two touchpad buttons. It's a handy substitute to a Windows administrator password for logging in and it worked fine in our tests. There's also an option to login using your face using facial recognition software paired with the webcam which also worked well. There aren't any other specialised security features though, such as a smartcard reader or BIOS options for restricting the use of USB storage devices.