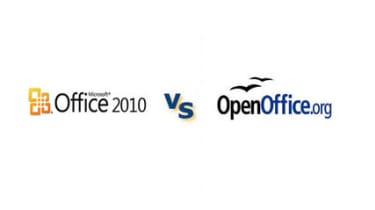 That said, if you're one of the people who can't stand the Ribbon, then don't be put off. OpenOffice is easily as good as, and probably better than, older versions of Office, and they cost hundreds of pounds in their day. For a program based on menus and old-fashioned toolbars, it's still relatively easy to find your way around.

Winner: Microsoft Office, by a good head and shoulders. The Ribbon toolbar provides the right work environment for whatever task you're currently carrying out on a document.

The OpenOffice word processor is called Writer and, as you've probably gathered from reading above, it's an awful lot like older versions of Microsoft Word. In fact, the layout of the toolbars and menus is almost exactly the same as older versions of Word, just less cluttered. 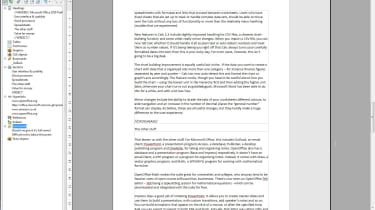 The handy navigation feature in Writer lets you see all the various elements in your document, from headings to URLs and user comments, and quickly flick between them. You do need to use Writer's pre-defined heading formats for this to work though.

There are a few interesting features new to this version. You can now add two levels of password protection to documents: one password allows users to open the document normally, with full control, while another allows the user to open the document in read-only mode. It's not as sophisticated as the Information Rights Management (IRM) feature in Microsoft Word, but it is a lot simpler. Users don't have to authenticate themselves against an IRM server to increase their privileges from Read-only to Read/Write, they just have to know the right password. Of course, the downside is you have to find a secure way of telling people the password, which could be tricky in large companies.