Nokia's last gasp Symbian smartphone, the E7, is here. Does it go out in a blaze of glory or is it a damp squib? Julian Prokaza finds out in our review. 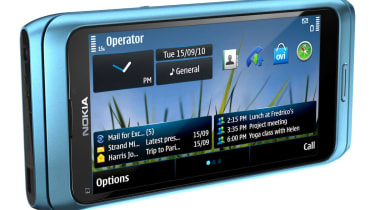 Nokia has been having a bit of a hard time of late. The Finnish mobile phone giant recently ditched the ailing Symbian as its mobile operating system of choice (in favour of Windows Phone 7) and then announced 7,000 job losses in April as part of a 1 billion cost-cutting measure. So, with the future of both the company and Symbian still uncertain, now might not seem like an ideal time to invest in a new Symbian smartphone from Nokia, which is unfortunate, as that's just what the E7 is.

To Nokia's credit, the E7 is an extremely stylish smartphone. It has a sleek, all-aluminium shell with rounded edges and neatly capped-off ends, along with a 4in screen that fills the entire front of the handset. It sits nicely in the hand too, although the finish does make it rather slippy. At 176g, it isn't too heavy to tote around in a jacket pocket.

All-screen it may be, but the E7 also packs a physical Qwerty keyboard although it takes a short while to figure where this lurks. As with similar smartphones from other manufacturers, the keyboard is actually hidden beneath the screen, but the two halves of the case fit together so snugly that it isn't immediately obvious how to get at it. 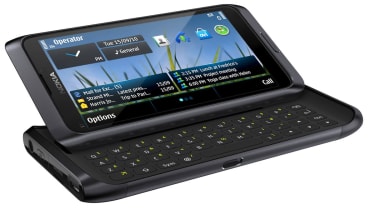 Flipping up the E7's screen to reveal the keyboard is a Herculean task.

Unfortunately, even when armed with the requisite knowledge, getting the case to open still isn't easy. The E7's smooth, rounded edges don't give much purchase for a finger and it takes two hands and two thumbs to push the screen out of the way. With a firm shove though, the screen slides up (in landscape orientation) to sit at a 30-degree tilt that's ideal for use while typing.