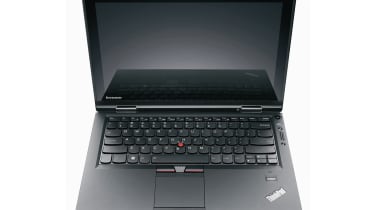 This is a major disadvantage although Lenovo's RapidCharge feature promises to charge the battery up to 80% of capacity in around half an hour which was about right in our tests. This will be a huge boon for frequent travellers that have little time to wait while their devices charge, but we still would have preferred a more capable battery. You can buy the optional slice battery for an additional cost, but this costs an extra 168 ex VAT and adds around 360g to the X1's weight, which makes buying an ultra-portable somewhat redundant.

The 1,366x768 pixel resolution is standard for the 13.3in screen size, but we expected a higher resolution Lenovo did manage to squeeze 1,440x900 pixels into the older ThinkPad X301.

As well as being incredibly small, the ThinkPad X1 is also surprisingly tough. As well as a spill-proof keyboard that should prevent any coffee-related accidents, the 13.3in screen is protected by ultra-tough Gorilla Glass. This is great for preventing scratches, but it does come with one caveat; instead of the usual reflection-defeating matt screen coating, Gorilla Glass is only available with a glossy finish. This could be a problem for anyone that works under harsh office lighting, as light reflections are instantly visible as soon as you lift the laptop lid a bizarre design decision on a business laptop.

There's an excellent amount of tilt to help combat these reflections, but viewing angles aren't the best; despite rumours Lenovo would be using a high-quality IPS panel, the X1 instead uses a lower-quality TN screen that makes colours appear warped at more extreme angles.

On the plus side, image quality was rather good; colours were accurate yet vibrant and text looked crisp. Brightness was slightly above average, but not high enough to make the screen particularly legible in direct sunlight. The 1,366x768 pixel resolution is standard for the 13.3in screen size, but we expected a higher resolution Lenovo did manage to squeeze 1,440x900 pixels into the older ThinkPad X301. Apple has also managed it on the 13in MacBook Air.