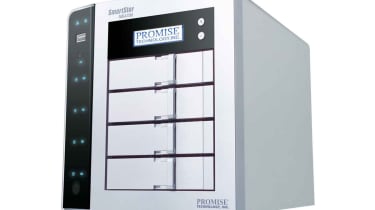 Promise Technology has never had a high profile in the small business NAS market but its latest SmartStor NSx700 desktop appliances aim to change that perception. Two new models are available and comprise the six-bay NS6700 and the four-bay NS4700 on review here.

Previous SmartStor appliances failed to pass muster in our speed tests - we were unimpressed with the older NS4600 and its pedestrian performance. Promise now steps in line with much of the competition as both new models use a 1.8GHz dual-core Atom processor and memory gets a much needed quadrupling to 1GB of DDR2 RAM. 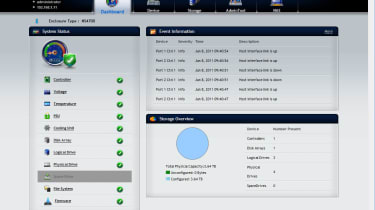 The appliance's newly designed web interface provides a useful dashboard showing the status of all components and drives.

Build quality also sees big improvements as the chassis is now all-metal and the cheap plastic drive carriers from the NS4600 and NS4300 have been replaced with sturdier metal frames. The appliance also has five USB2 and two Gigabit Ethernet data ports, but no eSATA.

For initial installation you can use Promise's SmartNAVI client which runs as a background task accessible from the System Tray and automatically finds appliances on the network. The setup wizard setup checks the network, applies a range of default settings based on what it finds and automates array creation.

Promise's new web interface looks very smart with its one-click setup routine but we recommend avoiding any wizards until you're sure you know what you want to do with your storage. Promise works differently compared to other vendors as it uses disk arrays to group selected physical drives together into pools.

Within these pools you create multiple logical drives and choose a RAID type for each one. If the pool comprises four drives you can choose from stripes, mirrors, RAID 5 or RAID 6 for the logical drive. However, be careful during this phase as although the NS4700 supports NAS and IP SAN operations, each logical drive can only be used for one of these and the mode must be set during creation.