We take a sneak peek at the new Sony Vaio Z ultraportable laptop which is unbelievably light and makes clever use of Intel's Light Peak technology. 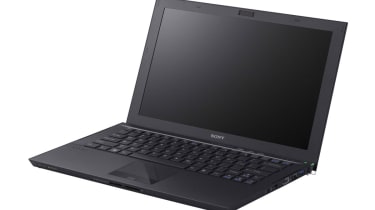 Thunderbolt is one of the most exciting technologies we've seen recently, but until now the incredibly fast data transfer technology has been seen only on Apple's Macintosh range of computers. Sony has just announced an impressively light ultraportable laptop with a Thunderbolt port, which isn't really a Thunderbolt port, for attaching an external graphics card.

The new Vaio Z is incredibly light for a 13.3in ultraportable laptop. At just under 1.2kg it's only a touch heavier than most netbooks and it's very thin too. We have our concerns about the robustness of the chassis which flexed under pressure more than we'd like, but the carbon fibre build will hopefully prove sturdy enough for life on the road. 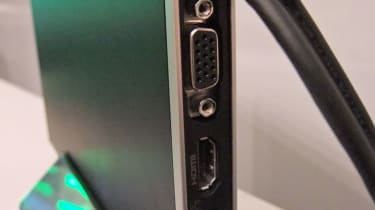 The rear of the Power Media Dock for the Sony Vaio Z showing the USB3, USB2, HDMI, VGA, Ethernet and power pass through ports.

Alongside the Ethernet, HDMI, VGA and USB2 connectors is the Thunderbolt port. Unlike Apple's and Intel's implementation, which takes the form of a Mini DisplayPort-compatible connector, Sony has decided to use a USB3 port. The underlying technology is still the same as Thunderbolt - Intel's Light Peak but since it doesn't use the Mini DisplayPort connector, it can't be branded as Thunderbolt. Perversely, squeezing Light Peak into a USB3 connector is against the rules set by the USB Implementers Forum, so it can't be branded as USB3 either.

Alongside compatibility with USB3, its main use will be for connecting an included Power Media Dock. This Dock is a combination DVD writer, port replicator and graphics card with USB2, USB3, Ethernet, HDMI and VGA ports. It also has a pass-through connector the power port for recharging the laptop's battery since it uses the power port on the laptop. When connected to the Vaio Z, the laptop switches away from its integrated Intel graphics chip and uses the Dock's dedicated AMD Radeon 6650M chip instead which should be much more powerful.