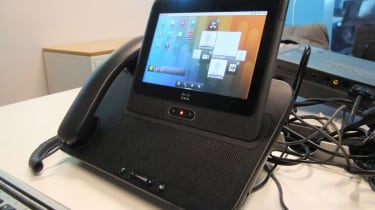 On the operating table

Unlike the vast majority of other modern Android tablets which use the 3.0 Honeycomb version of Google's operating system, the Cius uses Android 2.2 which was originally designed for smartphones. The interface is largely unchanged from other Froyo devices and didn't feel quite as responsive as other tablets we've seen.

The Cius uses Android 2.2 which was originally designed for smartphones.

Although all this might put off some users, Cisco has confirmed that the Cius will be compatible with Ice Cream Sandwich, Honeycomb's successor, at some point in the future. In line with the Cius' corporate focus, instead of receiving operating system upgrades over the air automatically, administrators can choose when to deploy an upgrade, if at all. 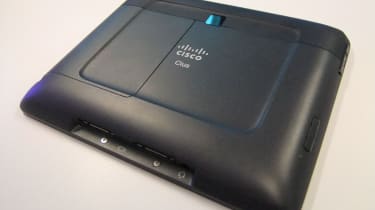 The rear of the Cisco Cius.

The Cius should be easier than other tablets for IT administrators to deploy thanks to Cisco's Communications Manager software. It can common configuration settings to a whole fleet of Cius tablets, such as distributing security certificates, enforcing a minimum level of password complexity, remotely wiping lost tablets and disabling certain hardware features such as the SD card slot. Sadly, it doesn't appear possible to disable the rear or forward facing webcams.

It isn't clear if the encryption is hardware accelerated or not. If it isn't, wiping the Cius could take a very long time, depending on how much data is stored locally.

To make up for the lack of access to Honeycomb-compatible tablet-optimised apps Cisco has its own Android app store, AppHQ. Administrators will be able to setup a 'store within a store' for their users where only company-approved apps will be available for download or purchase. Administrators can enable or disable access to the Android Market at will.