When is a netbook not a netbook? When it’s designed by Sony and AMD. Alan Lu takes a look at the new 11.6in Vaio Y series laptop to see if it really does have all the advantages of a netbook without any of the limitations. 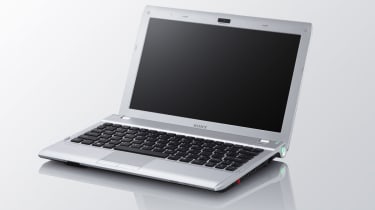 Sony has produced netbooks before, but we've been unimpressed with the cramped keyboards and poor battery life of the company's previous attempts. Although Sony doesn't call its new Vaio Y series laptop a netbook, it uses a new AMD E350 Fusion dual core processor which, in our application benchmarks, performs very similarly to Intel's Atom netbook processors.

Paired with 4GB of RAM the Vaio Y feels very snappy and it's fast enough for working in a couple of applications simultaneously or basic image editing, but we wouldn't want to use it for more intensive work such as editing video.

One oddity is that even though the Vaio Y has 4GB of RAM, it only comes with the 32-bit version of Windows 7.

One oddity is that even though the Vaio Y has 4GB of RAM, it only comes with the 32-bit version of Windows 7 Home Premium. This means that only 3.5GB of RAM is actually available for use. It's an annoying limitation as the operating system can't be swapped out for a 64-bit version, or Windows 7 Professional for that matter, when ordering. Users still stuck with older applications that aren't 64-bit compatible might be pleased though.

Even more oddly the memory can't be upgraded past 4GB. Although this sounds limiting, the Vaio Y's AMD processor isn't designed for demanding applications so it's more likely you'll bump into its limitations first rather than a lack of memory.