Gateway wants a piece of the action in the SMB network storage market and has teamed up with Hitachi Data Systems to get it. In an exclusive review of the GS2040, Dave Mitchell sees whether this partnership has produced the perfect IP SAN appliance. 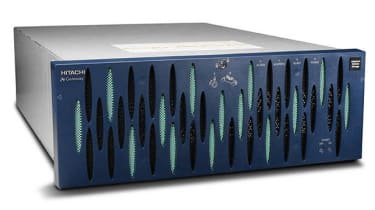 Acer has had a relationship with Hitachi Data Systems going back a number of years and, as part of its onslaught on the SMB network storage market, has extended this to its Gateway business division. With this agreement, Gateway is marketing Hitachi's lower-end storage arrays under its own brand leaving the Japanese giant free to concentrate on the enterprise storage market.

Gateway makes no attempt to disguise the fact that it's in partnership with Hitachi.

In this exclusive review we take a look at the GS2040, the entry-level model in this family of three products. Gateway makes no attempt to disguise the fact that it's in partnership with Hitachi. The well-built 4U chassis has room for fifteen hot-swap carriers and supports mixes of SAS and SATA drives, plus Gateway offers 200GB SSDs. At present, the GS2040 only supports up to 2TB SATA2 drives and is not yet certified for 3TB models.

However, if you go for a full house of 2TB SATA drives, capacity can be pushed to 30TB. The appliance can also be expanded to a maximum of 90 drives using extra shelves so storage can be increased to a very respectable 180TB.

The GS2040 has plenty of fault tolerance as the chassis comes, as standard, with two redundant hot-plug power supplies and a pair of hot-plug fan modules. The price includes two controllers which run in active/active mode and they each incorporate 2GB of battery protected cache memory mirrored across both of them. 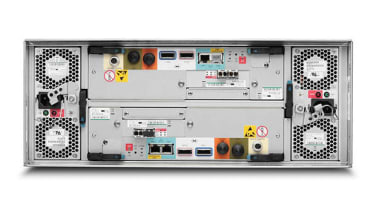 The controllers also have pair of SAS ports so extra expansion shelves can be connected via fault tolerant links. You have a choice of data ports as the GS2040 can support either 4/8Gbit/s FC SANs or IP SANs. Our review unit was supplied with dual Gigabit iSCSI data ports on each controller.

Installation is handled by the Storage Navigator Modular 2 (SNM2) software which is designed to manage multiple arrays from a central console. It runs as a group of web services on your chosen host system which can be accessed either locally or from another remote system.