A big-name high quality IPS monitor at a bargain basement price? Surely there's a catch? Jim Martin gets squinting to find out. 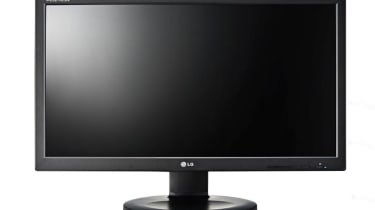 LG's new IPS231 is hardly the last word in style, but if you care more about image quality than looks, there's a lot to like about this 23in monitor. As is clear from the name, it uses an IPS LCD panel rather than the more common TN variety.

This is important as IPS (which stands for in-plane switching) monitors usually have better colour accuracy and wider viewing angles than TN (Twisted Nematic) panels. Essentially, the liquid crystal alignment is controlled slightly differently to achieve better viewing angles. Yypically manufacturers claim 178 degrees horizontally compared with 160-170 for TN panels which may not sound like much, but can make a big difference.

Wider viewing angles mean that colours remain true even when you're looking at the monitor from the side. This isn't so critical when a single user is sat in front of a monitor, but it certainly helps when others are looking on as well.

Colours, though, are remarkably good considering the price.

The IPS231's viewing angles are certainly wider than those of any TN-based monitor we've seen, but they're not the best. Colours, though, are remarkably good considering the price. We needed only to tweak the brightness level: the default settings produced surprisingly accurate colours.

Contrast, too, was a step above most budget LCD monitors, with good black levels and clear distinction between similar shades of dark grey. The backlight - edge-mounted LEDs - was nice and even and there was virtually no light bleed around the edges of the screen.

One of the disadvantages of IPS displays is they generally have slower response times than TN panels. However, although there was very slight ghosting in videos and games, it's only noticeable if you're looking for it and there are objects flying around the screen.

Switching between the DVI and D-Sub inputs requires two button presses rather than one, since the five front-facing buttons aren't labelled. When one is pressed, an on-screen display appears above them and shows their functions: much better than the usual engraved labels which can be impossible to see, even in daylight.

The menus offer a fairly standard range of adjustments, but colour settings are better than average. There's control over red, green, blue, cyan, magenta and yellow levels, plus gamma and an sRGB preset. However, most people won't need these thanks to the accurate default colours.

Another unusual feature, considering the low price, is a height-adjustable stand which also tilts and swivels. The 140mm of vertical adjustment makes it much easier to position the screen comfortably than a display with no adjustment. There's also a pair of integrated speakers, which are predictably tinny, but no headphone output.

Power consumption isn't as low as we'd expect from an LED-backlit monitor of this size, but this is mainly because of the IPS panel, which draws more power than TN versions. If you reduce brightness to 50 per cent, power drops from 31W to 24W.

If you need a monitor for colour-accurate work, but want to keep the price to a minimum, the IPS231P is the ideal choice. It costs no more than the equivalent 23in TN-based monitor with height adjustment, yet image quality is in a different league. Even if colour accuracy isn't your top priority, this remains an excellent-value monitor.