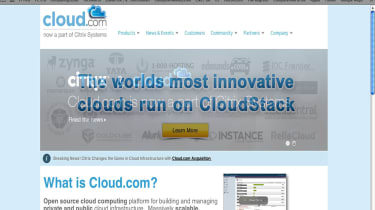 Citrix has acquired Cloud.com, a developer of cloud orchestration and administration tools, for an as-yet undisclosed sum.

"Our premise was that organisations want to run their IT the same way that Amazon [Web Services] has been successful," said Cloud.com chief marketing officer Peter Ulander, who has become VP of product marketing for Citrix's new Cloud Platforms Product Group. Other Cloud.com executives have also joined Citrix.

Ulander added that 90 per cent of CloudStack deployments so far have been on top of Citrix Xenserver, but said that the software will remain hypervisor-agnostic CloudStack also runs on VMware vSphere, KVM and open source Xen, for example, and support for Microsoft HyperV is promised.

He noted too that, with Citrix heavily involved in the OpenStack project, and with Cloud.com already committed to open source, it would be extending OpenStack support to the Cloud.com product line later this year.

Sameer Dholakia, Ulander's new boss at Citrix, described the acquisition as "strategic", and said that it fills a hole in Citrix's range as the company strives to position itself as a leader right across the cloud service business. It already had XenServer, plus NetScaler for optimising service delivery at the network level. CloudStack now adds the ability "to build cloud-scale infrastructure the way the world's larger clouds have been built," he said.

Dholakia added that Citrix will also address what he said was the biggest inhibitor for enterprises looking at building large clouds, namely education and understanding.

Starting in August, it will run free 90-minute webinars on how to build successful clouds, with input from 'cloudmasters' who have already done just that, and later in the year it will offer two-day hands-on technical workshops in selected cities around the world.