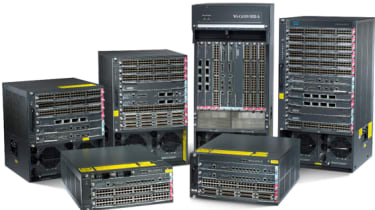 Cisco has announced a series of upgrades to its Catalyst 6500 network switch.

The upgrades should enable the 6500 to cope with what Cisco sees as new demands placed on the typical network infrastructure of an enterprise.

According to the networking giant, Supervisor Engine 2T module triples the performance of the switch, boosting total throughput from 720Gbit/s to 2Tbit/s. Also available are a series of modules with more and/or faster Ethernet ports from a module with 16 10 Gigabit ports to a model with 48 Gigabit Ethernet ports, either copper or fibre.

Since two 6500 switches can be pooled together as a single virtual switch, using the virtual switching system, Cisco claims total throughput in this scenario can be as high as 4Tbit/s.

Although the whole package of upgrades is touted as '40G [40 Gigabit Ethernet] ready', there aren't actually any 40 Gigabit Ethernet ports but can be added later when such products become available in the future.

Software upgrades look even more intriguing than the new hardware options, from new firewall and network analysis modules to the new SM2 Wireless Services module. Cisco claims this can manage up to 500 wireless access points which, in turn, can provide wireless network access for up to 10,000 client devices.

Network switches are a core part of Cisco's business, despite the company's well-known forays into other markets such as VoIP phones and video collaboration software and services. Scott Gainey, Cisco's director of switching solutions, was keen to point out that only does this series of upgrades prolong the Catalyst 6500's useful life time for customers, it also does so at less cost than buying the closest performing alternative from arch-rival HP.

John McCool, the senior vice president of Cisco's Data Centre, Switching and Services Group, pointed to the claimed performance of the Catalyst 6500 as an example of the 'advantages of building your own silicon to innovate' instead of relying solely on off-the-shelf chips and other components.

The high claimed performance advantages of the Catalyst 6500 may seem like overkill, but Padmasree Warrior, Cisco's chief technology officer (CTO), said the upgrades were prompted by the company's forecasts that 90 per cent of all network traffic will be video by 2013 and 20 per cent of enterprise workers will use virtualised desktops by 2014 usage scenarios which will demand an ever faster network infrastructure.