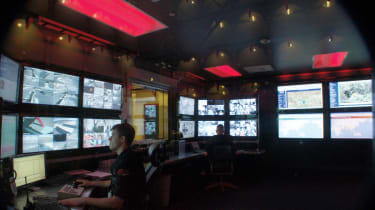 All of this means that GCA not only has a major technological and contractual obligations to its casino clients, it is also subject to regulations and compliance rules from several jurisdictions. This is why GCA chose SuperNAP - according to Vice President of Information Technology Jim King only Switch could provide the necessary service guarantees his company required. 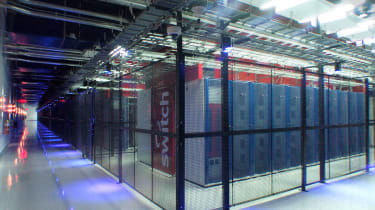 Just a small fraction of the servers available at SuperNAP.

All backups are handled using an EMC disk-to-disk system with no tape involved. Despite the presence of armed guards and mesh cages separating us from the servers, we weren't allowed to carry liquids of any quantity to prevent them from getting wet even the fire suppression system is waterless.

Although SuperNAP easily has the capacity to scale to even more servers to accommodate GCA's needs, including the provision of several cloud services or even migrate operations to another site through a dedicated loading bay, the transaction processing company has plans to reduce its server numbers by as much 60-80% using virtualisation. 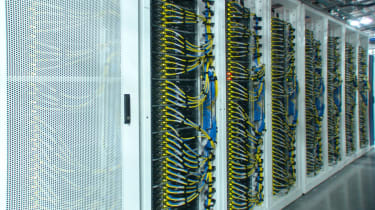 That's a lot of cabling.

Even if that VMWare-enabled rationalisation happens, ensuring sufficient cooling and a consistent power supply for all that infrastructure will remain a primary concern for GCA and Switch. Instead of using an off-the-shelf cooling system Switch designed its own the Thermal Separate Compartment in Facility architecture or t-scif. 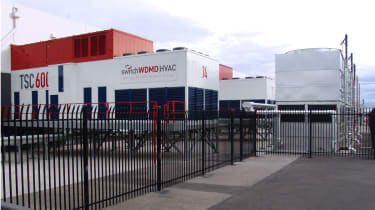 The externally visible parts of the cooling system at SuperNAP.

The external components resemble a series of large truck trailers on stilts and feed cold air into the server rooms and pump out all the hot air using large ducts protected by keypad-locked doors. T-scif uses one of four cooling methods - direct expansion, chilled water and direct or indirect evaporative.