NFC is already making its presence felt for payments. But could it have wider business uses, asks Paul Briden? 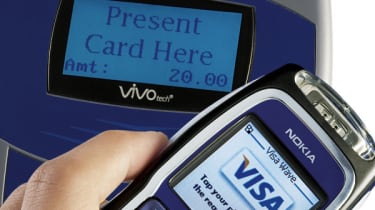 Every day, thousands of commuters use near field communications (NFC), although most may never realise it.

NFC is at the heart of London's Oyster card, is already built in to many Visa debit cards, and is being used to pay for small-value transactions from Spain to Hong Kong.

And recent developments, especially from the mobile phone manufacturers, are making NFC even more mainstream. Google Wallet, the BlackBerry Bold 9900 and the Google Nexus S all feature NFC. There are strong rumours that NFC might be built into the iPhone 5, when it comes out later this year. And NFC is set to be included into other devices, including tablets and even smart TVs. The market could be worth $670 billion - 420 billion by 2015.

The technology behind NFC is not actually that new. But the way that developers, manufacturers, enterprises and, importantly, marketing executives is changing.

At its core, NFC is about contactless data transfer to and from devices. This has a number of applications. The most common is payment, using a phone as a debit or credit card by touching it to NFC readers at tills or pay points. But it has wider uses.

"We've been talking about payment and transit but that's not the only thing NFC brings to the table," says Charles Dachs, director of product management for mobile transactions at NXP, a developer of NFC technology.

Cashing in on cashless

"Essentially we talk about NFC in three ways: replacing the cards in your wallet, discovering content using your phone as a content reader, and peer-to-peer a device-to-device exchange of information."

As an example, NFC could be used to link Bluetooth devices to peripherals like headsets. A phone could be synchronised to a headset just by physically "bumping" them together.

Certainly this kind of functionality would be very attractive for consumers, but businesses might need greater incentives to adopt NFC. Dachs believes this lies in the content reader and peer-to-peer elements of the technology.

"It's about more than just using your phone as a card, it can provide a much richer experience with targeted marketing and direct marketing," he says.

The most obvious marketing application is in digital coupons from purchases, or NFC readable posters. Vouchers would be redeemable on a consumer's phone.

According to Dachs, part of NFC's potential lies in making marketing methods more comfortable and less intrusive for the consumer and, in turn, making them more effective for businesses to deploy. No-one likes marketing emails and spam, but directly interacting with advertising in our daily lives might be more fruitful for both sides.

Another appeal for marketers is the low cost of deployment: "It doesn't need to be point of sale. Contactless tags and stickers cost literally pennies," says Dachs. Marketers could, he suggests, try mass deployments of interactive content in magazines and posters, and hope for a good return for a minimal investment.

NFC usage could also grow organically, with manufacturers such as RIM putting out NFC capable handsets and the relevant application programming interfaces (APIs) for developers. As NFC supports direct "bumping" of data between handsets, popular apps could spread "virally" between users. In turn, this could cement the appeal of NFC with marketers and developers.

More, though, needs to be done to make NFC a mainstream business tool.

According to Rob Bamforth, analyst for Quocirca NFC has potential as a payment method. But "doing something useful" with the technology in business processes and transactions will remain "one of the hardest parts."

"It's not so much the technology itself but how you get it to the right level of ubiquity and ensure that the commercial elements are lined up," he says. "Standardisation is a definite requirement."

The take up of NFC is also likely to grow, Bamforth believes, if the technology reducing the risk and operational costs of transactions is a major factor in Bamforth's view.

"It has to be lower transaction costs," he says. "It's no good if it's the same fees [as credit cards] to Visa or the banks and so on, it needs to have a reduced cost per transaction."

In recent years the average value of credit card transactions has fallen. Consumers are making lower-end purchases with their credit cards, and this is something merchants and banks would rather avoid. NFC payments could fill that gap, leaving credit cards for original use, as a way of paying for more expensive goods and services.

One positive aspect of NFC for retailers is support for automated audit and fraud components. Payment activity via NFC can be fully audited, managed and controlled digitally. Having an audit system that is more economical and accountable through automation will certainly appeal to businesses.

"NFC is only a way of connecting the end part of the process," says Bamforth. "What's important is how the technology interfaces with a business process and how it can alleviate the more costly and fiddly elements".

"It needs to be universal," he adds. "The last thing we want in NFC is separation into systems that don't worth with each other."

In terms of investment, the upfront costs to businesses of NFC could be relatively small; more modern point-of-sale systems, for example, often already support NFC.

"The big [cost] element is the back-end systems, the IT processes and process handling," says Bamforth. "In reality the [financial] impact is more in the infrastructure network."

However, Dachs suggests much of the infrastructure groundwork had already been done.

"There's a legacy infrastructure for transit which is widely deployed," he says. "Banking is then the easiest one, the infrastructure deployed is completely standardised through Visa, Mastercard and so on, and NFC is established as part of that."

"Some merchants in the US, such as McDonalds, have contactless payment machines already and can use exactly the same models for NFC. The majority are hardware ready," he says.

Dachs points out that software upgrades might need some investment but overall, the costs for most businesses will be minimal.

Even so, the fringe nature of NFC could still act as a deterrent for businesses. To succeed, the component parts of NFC need to come together in a cohesive and usable way.

At Quocirca, Rob Bamforth believes that the different groups interested in NFC need to do more to move in step. "I must admit, I thought we'd be further on by now," he says.

Dachs agrees that for NFC to succeed, it still needs more effort. But he is optimistic about the current level of interest and investment in NFC technologies.

"First there are the manufacturers such as RIM, Nokia, Samsung, and Google. There is no manufacturer that is not looking at this technology," he says.

"With network operators it's the same thing." Orange, for example, has been promoting NFC across Europe including in the UK, as has Telefonica, the parent company of o2. O2 also has plans for the UK market.

"The UK NFC infrastructure is growing for payment," says Dachs. And he believes convincing end-users should not be a problem.

"It's very easy to educate the consumer to use their phones for payment," he suggests. But the longer-term success of NFC will depend on its adoption at the enterprise level.