Previous Dell Vostro business laptops have been Jacks of all Trades; Tom Morgan looks at the new Vostro 3350 to see if it is now a master of everything combining features and performance with battery life and portability. 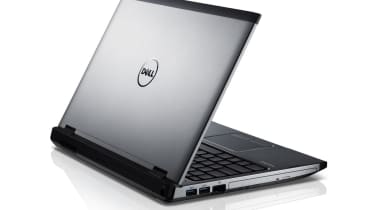 With its brushed metal finish and minimalist design, the Vostro 3350 looks incredibly refined for a business laptop; a lot of plastic has been used to mould the chassis, but it still feels reassuringly sturdy and tough enough to survive life on the move. It might weigh a shade over 2kg, but the compact machine is small enough that it shouldn't be difficult to transport.

The massive eight-cell battery that protrudes from the bottom of the chassis does make it slightly awkward.

One exception to this is the massive eight-cell battery that protrudes from the bottom of the chassis. It does make it slightly awkward to fit into smaller bags, but we think the stellar battery life is worth the trade-off; managing just under eleven and a half hours in our light-use test, you should be able to work all day away from the mains without having to reach for a charger.

This result is more impressive when you consider the hardware inside the 3350; our review sample came equipped with an Intel Core i5-2410M processor running at 2.3GHz and 4GB of RAM. Turbo Boost can increase the clock speed to a healthy 2.9Ghz for increased performance, which helped it achieve a very respectable 54 in our multimedia benchmarks. The Windows desktop felt snappy, even during our benchmark tests which can bring weaker machines to a grinding halt. Only extensively multithreaded applications should prove a challenge for this laptop.

When running everyday tasks, it stayed cool to the touch and with minimal fan noise; pushing it harder with more intensive programs caused the fan to speed up, but not to a level where it became a distraction. A 320GB hard disk should be large enough for most, but we would have liked at least a 500GB disk as standard at this price.