Ofcom worries ISPs are getting worse at misleading with advertised broadband speeds. 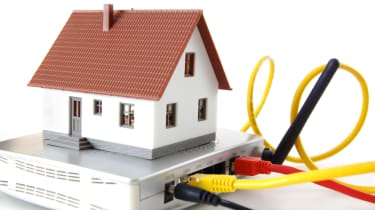 The gap between actual broadband speeds and advertised up to' speeds has widened, as concerns grow about misleading claims from ISPs.

Ofcom data showed the average advertised speed in May was 15Mbps, 8.2Mbps higher than average actual speeds of 6.8Mbps.

Copper ADSL lines, used by 75 per cent of UK homes, was far from delivering on the maximum of advertised speeds.

The average download speed received for ADSL up to' 20Mbps and 24Mbps ADSL services was 6.6Mbps. More than a third of customers (37 per cent) on such contracts received average speeds of 4Mbps or less.

An increase of just 0.6Mbps is not much for customers to get excited about.

"Although fewer ISPs now advertise their services by headline speed, Ofcom continues to be concerned that theoretical up to' speeds have the potential to mislead consumers," the watchdog said.

Ofcom has called for a Typical Speeds Range (TSR) to be implemented by advertising authorities.

The TSR would force ISPs to represent the range of speeds actually achieved by at least half of customers, Ofcom said. Where up to' speeds are used in ads, the TSR should have at least equal prominence, it said.

"The research is still telling us that some consumers are not receiving anywhere near the speeds that are being advertised by some ISPs," said Ofcom chief executive, Ed Richards.

"Ofcom continues to urge the CAP and BCAP committees to make changes to their advertising guidance so that consumers are able to make more informed decisions based on the adverts they see."

Ofcom had some positive news for end users, noting the average UK broadband speed increased by 10 per cent, from 6.2Mbps in November/December 2010, to 6.8Mbps in May 2011.

However, Michael Phillips, product director at Broadbandchoices.co.uk, questioned whether that accounted for a "surge" as Ofcom had suggested.

"An increase of just 0.6Mbps is not much for customers to get excited about," Phillips said.

"Our own independent consumer research revealed this year that broadband speed dissatisfaction actually increased for the fourth consecutive year in 2011 so this is clearly an issue that needs urgent attention."

"The improved availability of superfast broadband from BT Infinity is a positive development but it's horses for courses so consumers should think about the speed they actually need before forking out," Phillips added.