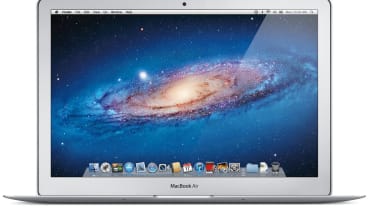 Since its revamp last year the MacBook Air has been our favourite ultraportable laptop thanks to its sleek yet sturdy design and excellent battery life. The slender ultraportable has now been given a makeover and it's as good as ever. Almost.

The slender ultraportable has now been given a makeover and it's as good as ever. Almost.

Externally, almost nothing has changed. The new 13in MacBook Air looks identical to last year's version which is no bad thing the robust yet ludicrously thin chassis feels great and weighs just 1.34kg so it's easy to carry around. The slim build does means some of the ports are packed in quite closely together, so it's possible a chunky cable or flash drive could foul an adjacent port. 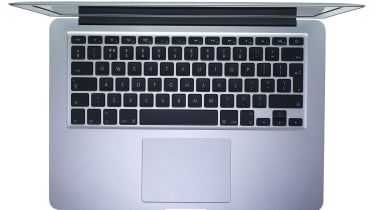 One new hardware feature that soon becomes apparent is the backlit keyboard which automatically lights up in dimly lit conditions, such as a lecture hall or airplane cabin. It was oddly missing from last year's model and its return is a welcome addition to a large, comfortable and responsive keyboard. The touchpad is as large as ever and the MacOS X Lion operating system includes extensive support for the pad's smooth and slick multitouch gestures. These work far better than the clunky, bolted-on gestures available on Windows laptops.

One of the other faults of last year's MacBook Air was the ageing and somewhat underpowered processor. Thankfully that's been remedied with the inclusion of a brand-new ultra low voltage 1.7GHz Core i5 processor from Intel. It's faster than the elderly Core 2 Duo used by its predecessor and should be more than capable enough for most tasks. There's also 4GB of RAM, up from the measly 2GB of the old model, but sadly you can't fit any more.