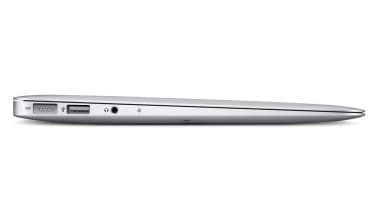 Battery life wasn't as long as we had hoped.

Battery life wasn't as long as we had hoped. It lasted a very respectable six hours and 36 minutes, just long enough to last a transatlantic flight, but the previous 11in Air lasted just under eight and a half hours. It also pales in comparison to some, admittedly larger, Windows-based ultraportables. We suspect this is due to the new Core i5 processor which has a higher TDP than the ageing Core 2 Duo used in last year's model.

The 11in Air misses out on the SD memory card slot found on the larger 13in model, but it does have a high-speed Thunderbolt port which can be used for connecting both storage and displays. Although we're still testing the first Thunderbolt peripheral to hit the market, the Promise Pegasus RAID array, we did manage to test the 11in Air's Thunderbolt connection in Target Disk Mode. This is where the internal disk of one computer can be accessed from another computer using nothing more than a Thunderbolt cable strung between the two. It's a feature previously limited to Firewire.

Sadly, Target Disk Mode is a poor demonstration of Thunderbolt's potential. When the Air was connected to a 13in MacBook Pro in Target Disk Mode, it could write large files at 47MB/s and read them at 70MB/s which are speeds we'd expect to see from a Firewire 800 connection. We saw almost exactly the same speeds when writing and reading small files, suggesting a flaw in Thunderbolt's Target Disk Mode.