A server operating system that costs just £35 and is easy to configure must have a catch. Ian Betteridge ventures gingerly into the Lion's den to find out in our review. 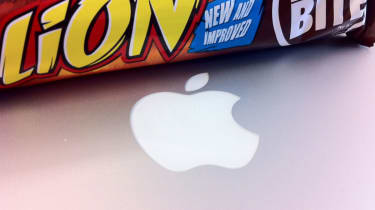 Server software isn't the first thing that comes to mind when you think about Apple, but it has a long history. In fact, Mac OS X Server 1.0 was released in 1999, almost a year before the public beta of the client version.

Since then, every release of OS X has had an equivalent server version, and every release has combined simple configuration with increasingly powerful, enterprise-ready features. It combines file sharing to Mac and Windows, email, web and Jabber-based IM services, as well as calendar and address book servers.

With Lion, though, Apple appears to be taking a break from this tradition. What it has produced is, instead, a server OS which is easier and faster to get up and running, but sacrifices some of the more advanced services which had been added to it over the years. 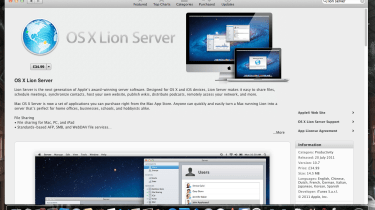 Lion Server is available exclusively as a download from the Mac App Store.

Unfortunately, this also means there is no supported way of installing Lion Server from a bootable DVD. You can, though, create a bootable external hard drive which you can install from. 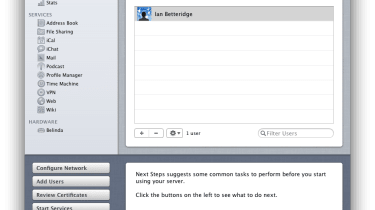 Almost everything in Lion Server is configured through a single application, Server.

Set up reflects this focus, too. Even with a minimal amount of server admin knowledge, you can be up and running with a basic server configuration in minutes. Once up and running, almost all of the configuration is done through the new Server app, and most configuration options are extremely simple. The Wiki server's options, for example, consists of a single switch to turn it on, plus an option to limit which users can create wikis.