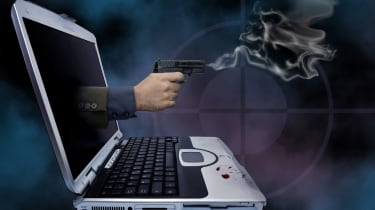 The average cost of cyber crime facing companies has risen 56 per cent over the last year, according to an HP study.

The median annualised cost of cybercrime incurred by a sample of 50 organisations stood at $5.9 million (3.6 million) per year, compared to $3.8 million from the same research undertaken in 2010.

The research, carried out in coordination with the Ponemon Institute, found the organisations surveyed experienced 72 successful attacks per week over a four week period. This represented an increase of nearly 45 per cent from 2010.

Soon hacking will be seen as an everyday occurrence in the same way as car theft.

Over nine in 10 of all cyber crime costs were caused by malicious code, denial of service, stolen devices and web-based attacks.

Can we trust em?

Many have queried the values placed on cyber crime, largely because it is so difficult to quantify certain effects of data breaches.

"How do you put a realistic financial figure on the theft of intellectual property, or breach of copyright, or loss of reputation, or system downtime due to malware?" questioned David Harley, senior research fellow at ESET.

"If it's so difficult to make those estimates with regard to past and present incidents, how on earth can we trust estimation of the impact of future incidents?"

Harley was doubtful there would be a levelling off of the rise in cyber crime cost figures, however. Ash Patel, country manager for UK and Ireland at Stonesoft, agreed there was little chance costs would come down, largely due to the increasing reliance on technology within enterprises.

"We as individuals, organisations and states rely more on technology and technical communication then ever before and the more we depend on these systems, the more crime levels in this area will increase," Patel told IT Pro[/i.]

"Soon hacking will be seen as an everyday occurrence in the same way as car theft. Hacking tools will become even more readily available on the Internet and as a result the knowledge required to perform cyber attacks will lower."