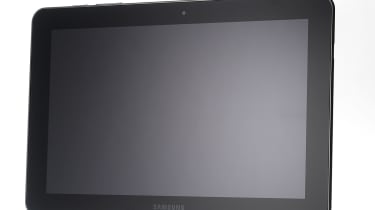 The Galaxy Tab 10.1 is the latest tablet from Samsung and while it may not be the first Android 3.0 Honeycomb tablet on the market it's certainly one of the most striking. It's just 9mm thick, so it's just as slim as the slender iPad 2, if not a hair thinner.

The Tab 10.1 is also very light for a tablet with a 10.1in screen weighing in at 558g 43g less than Apple's market dominating tablet. Although this may not sound like much, it does make an appreciable difference. The Tab is more comfortable to hold for long periods of time than other 10in tablets. It's obviously still not as effortless to hold as a featherweight ereader such as the 247g Amazon Kindle, but the low weight and thin profile are still remarkable especially when compared to far chunkier Android tablets.

physical compromises have been made to make the Tab 10.1 so light and thin.

We suspect the Tab 10.1's plastic build helped Samsung achieve this low weight and thinness. Unfortunately the plastic chassis isn't as sturdy as other tablets we've seen. It feels a bit creaky and flexes under pressure more than we'd like. The plastic back looks especially cheap. Although we would treat any tablet, or any other computer for that matter, with care, we would be especially careful with the Tab 10.1. 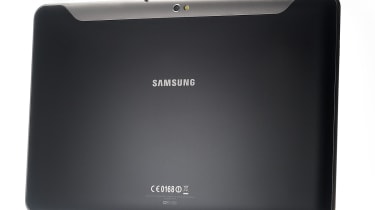 Other physical compromises have been made to make the Tab 10.1 so light and thin. Unlike some other Android tablets there's no memory card reader, HDMI port or USB ports full-sized or mini. There's a proprietary dock connector instead for charging, interfacing with a PC and connecting to a TV or projector using an adapter (sold separately). Although these omissions are understandable, they also remove some of the reasons for choosing a non-Apple tablet. Although a physical keyboard dock will be available, there's still no word on a SD card adapter like the one available for the iPad 2. Just as annoying as the use of an uncommon, proprietary cable for charging is the Tab's refusal to charge over a computer's USB port or third party USB chargers.