Apple kills off the optical drive in its latest version of the Mac Mini, its smallest and cheapest desktop computer, but there's more to this compact little desktop than meets the eye as Kat Orphanides discovers. 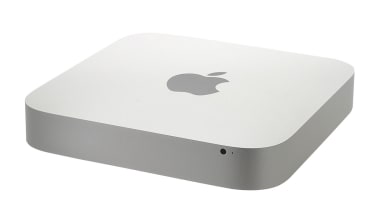 Apple's Mac Mini has always been the entry level option for any business that needs to be able to take advantage of OS X and Apple's beautifully made hardware. The computer's core specification is a major improvement on previous models - we reviewed the high-end 559 ex VAT model which has a 2.5GHz Intel Sandy Bridge Core i5-2520M processor along with 4GB of memory and a dedicated AMD Radeon HD 6630M graphics chip. Compared to the modest Intel Core 2 Duo chips of previous models, the processor in particular is a major technological leap.

Its performance is in line with its upgraded processor - an overall score of 63 in our benchmark tests isn't going to break any records, but the dual-core, quad-threaded Core i5 processor is powerful enough to hold its own when it comes to even challenging tasks such as video and audio encoding, particularly in combination with its efficient operating system.

The most glaring hardware omission is the optical drive: there isn't one.

The most glaring hardware omission is the optical drive: there isn't one. This goes hand-in-hand with Apple's introduction of the Mac App Store, but downloading all your software will be a pain for anyone with a slower net connection or limited bandwidth.

This also means there's no restore disk - instead there's an emergency OS partition you can boot into, where you can redownload and reinstall the operating system. Again, not ideal if you're in an area with slow connection speeds. We'd recommend backing up the Mini to an external disk as soon as it's out of the box, especially as boot disks created from Mac App Store copies of Lion won't work with this new Mini.

Although an optical drive has been omitted from the new Mini leaving room for a second disk, Apple only gives you the option of pairing a 256GB SSD with a 750GB hard disk for an extra 600. You can only have two 500GB hard disks if you buy the server version.