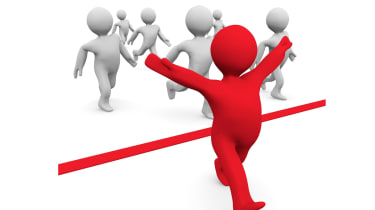 The decision to spin off Palm OS as a discrete company separating the software side from the hardware division was equally catastrophic, creating unnecessary upheaval at a time when more nimble rivals such as RIM's BlackBerry were emerging and defining the early smartphone market.

In the end, Palm OS was run into the ground to such an extent that the company was forced to abandon it altogether and bet the house on webOS and the Palm Pre a move that paid off in the form of a $1 billion takeover by HP, but which currently looks unlikely to return the Palm brand to the market-leading position it once enjoyed.

In the early years of the web, AOL was how millions of people first got online. The company hooked users by flooding mailboxes and magazines with what felt like billions of CDs offering a few free hours of internet access, addicting people to the web like a dealer offering the first hit for free.

The tactic clearly worked, as did a deal with Microsoft in 1996 to bundle AOL's software and web access with Windows. AOL became synonymous with instant web access, solidifying its reputation as the easy way for less technically savvy people to get online.

The company was by far the biggest internet provider in the US and had more than 35 million subscribers globally, leaving it rich enough to shell out a stunning $147 billion to buy Time Warner owner of CNN, among other media firms in 2001.

A decade on, the tables have turned. Time Warner has spun off AOL, and the firm is now a punchline for jokes about people who don't quite understand the internet. What happened?

AOL may have had access to a vast wealth of Time Warner video content, but remarkably it failed to migrate its customers to broadband to enable them to enjoy all that content. It has now refocused on selling advertising online, buying up blog properties such as The Huffington Post, but it still makes 40% of its revenue from subscribers to its web services and dial-up access.

In light of reports that as many as 75 per cent of its dial-up subscribers also have a broadband service which suggests they're paying purely for AOL email and other web services a focus on content may indeed be AOL's only hope for survival.

Yahoo didn't just blow it once the firm arguably missed a hatful of opportunities to save itself.

The one-time search leader was caught cold by Google's superior search technology so much so that in 2000, it actually borrowed Google's engine to power its own search results. Indeed, Yahoo liked it so much it tried to buy the company, but then-CEO Terry Semel refused to improve on a $3 billion offer for Google in 2002.

Two years later, Google's IPO valued the firm at $27 billion, and today it's worth a staggering $184 billion. While doubling or even tripling the offer may not have been enough to force Google's hand, Yahoo's unwillingness to take a risk on what would become its biggest competitor spoke volumes.

Yahoo repeated the mistake with Facebook in 2006, refusing to offer more than $1 billion for the social networking firm. Today, according to Goldman Sachs, Facebook is valued at $50 billion.

Possibly the biggest Yahoo misstep for its shareholders, at least was turning down Microsoft. The firms had been in acquisition talks for three years when Microsoft lost patience and made an unfriendly takeover bid or as unfriendly as $44 billion can be. Yahoo dodged the deal, and a subsequent offer of $20 billion for its search business, but eventually signed on for a ten-year search partnership.

Yahoo is now valued at half of Microsoft's buy-out offer, and is now focusing on ad sales and letting Microsoft's Bing take on the mantle of official rival to Google.

Friends Reunited not only pioneered social networking in Britain but, miraculously, found a way to make people pay.

Set up in 2000 by husband and wife team Steve and Julie Pankhurst, Friends Reunited was based on the premise of looking up old school friends. In the days before Facebook, the voyeuristic draw of finding out what had happened to former classmates proved irresistible, and it became the most talked-about site of the early 21st century.

The genius of Friends Reunited's business model was charging users if they wanted to contact old school chums. The prospect of millions of users handing over 5 each provoked wild valuations of the company's worth, even in the post-dotcom-boom era, finally tempting broadcaster ITV to buy the site for 120 million in 2005.