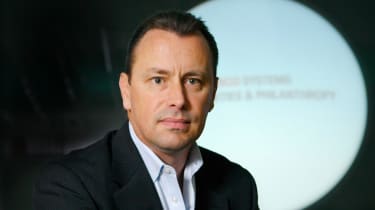 IT Pro: What do you mean by a reset event?

Throughout history there have always been events that reset the clock. It could be something like a pandemic. It could be both positive and negative. It could be a massive breakthrough in renewable energy. It could be an asteroid hitting the planet (it's happened many times before). It could be a war. I'm very optimistic and try not to concentrate too much on the dire aspects of life, but the reality is that things happen throughout history and they always have. If a reset event occurs, it could put us back a bit and that could reset the timescale.

That world {travel between parallel universes} is totally realistic physicists have proven mathematically that it can be done.

Dave on the future of the internet in a nutshell.

It's going to be a very different world.

Dave on one of his favourite TV shows.

I love Fringe. That world [travel between parallel universes] is totally realistic. It could be hundreds of years before we could transition between them [parallel universes], but physicists have proven mathematically that it can be done.