The first Thunderbolt storage array is finally here and it blitzes through our benchmarks at astonishing speeds. 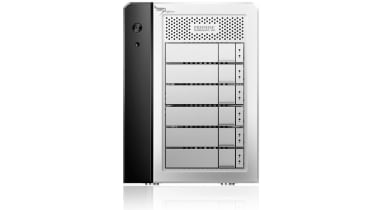 Thunderbolt has been a long time coming. Although the PCI-Express-based interface for external peripherals has been available on Apple Mac laptops since February of this year, the first Thunderbolt-equipped storage peripherals are only now trickling onto the market. The Promise Pegasus R6 is the first Thunderbolt storage device to arrive and it's a beast. The R6 is a six-disk RAID storage array, so it doesn't come cheap. 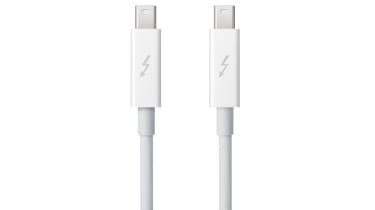 The current Apple Thunderbolt cables are so expensive since they have a Gennum transceiver and signal booster chip at each end.

Although the R6's price of 871 ex VAT will make some eyes water, it's easy to see where some of the money went. The metal case is robust and looks nice too. It's not too noisy either we only noticed its whirring hum in a quiet room. When placed next to a server underneath an air conditioner, it was barely audible. There's a second Thunderbolt port for daisy-chaining other Thunderbolt peripherals, including Apple's Thunderbolt-equipped Cinema Display. Bear in mind that a Thunderbolt cable isn't included, so you'll need to buy one from Apple for around 40 ex VAT.

Our review sample came fitted with six 1TB 7,200rpm Hitachi Deskstar hard disks. Although various capacities and a cheaper four-disk variant are available, a diskless version sadly isn't an option. The disks themselves are screwed into four easily removable trays, so replacing a failed disk or fitting a bigger disk is very easy. The trays aren't lockable though.

The R6 supports RAID 0, 1, 5, 6 and 10. Configuring the Pegasus with your chosen RAID level is straightforward using the setup program. The interface is a bit cluttered and could do with some tidying up, but it won't faze anyone who's ever had to configure a router, server or any other storage array. It's Mac-only, just like the drivers, which isn't surprising since Thunderbolt ports have yet to appear on Windows PCs. Once configured though, the Pegasus can be used with a Windows installation virtualised under OS X using a program such as Parallels Desktop.