A touchscreen network scanner might sound like a gimmick, but it's a surprisingly useful business tool as Simon Handby finds out in our review. 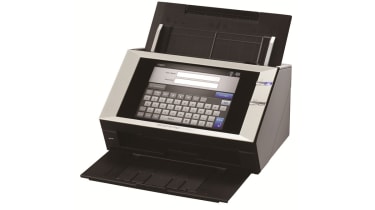 We were much more impressed by another feature which detects text that's been marked out with a highlighter pen and can add it as keywords in a searchable PDF.

While we like the touchscreen interface, it's likely that it contributes to slightly higher power consumption than we've measured in other scanners. While a peak consumption of 48 watts isn't anything to worry about, this only dropped to 37 watts when idle, and 15 watts when sleeping with the screen off. Those looking to minimise power use may want to configure a short sleep timeout and encourage their users to use the power button, which reduces consumption to a more palatable 3 watts.

Although limited to A4 originals, Fujitsu supplies a carrier sheet for scanning A3. Originals must be folded, but with the relevant options selected the N1800 will scan both sides and stitch them together into a single document. This failed on our first attempt, but worked after we rotated the original by 180 degrees and tried again. Even then, our stitched document had a grey band separating its two halves. We were much more impressed by another feature which detects text that's been marked out with a highlighter pen and can add it as keywords in a searchable PDF. Predictably this added a few seconds' processing time, but the results were accurate.

While the N1800's scans are good enough for general office use, we've seen better. Colours appeared a little undersaturated, while the distinction between dark shades had been lost in the darker regions of our test documents. Unusually, duplex scans suffered from bleed through of content from the opposite side of the page. We've not seen this before, although for fairness we should point out that the originals we tested had been printed onto comparatively thin 75gsm paper.

While the N1800 is full of useful features, administrators might initially find it tricky to master. Most users will find it easy to use, however, and in practice it's likely to cost less to buy and support than a document scanner attached to a host PC – particularly given that everything except paper jams and maintenance can be dealt with remotely. Deploying the N1800 can provide a low-fuss way to distribute scanning throughout the enterprise, but it's not perfect, and we wish it felt a little more robust.