Buffalo has been lagging behind the competition in the business NAS market, but its latest TeraStation Pro has been revamped. There's an Atom processor and more memory all at a surprisingly reasonable price, but Dave Mitchell doesn't think these are enough. Read this review to find out why. 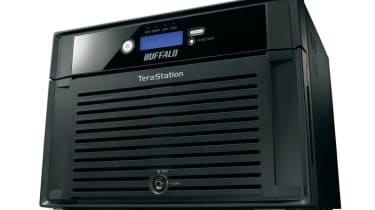 Buffalo Technology was once a main player in the business NAS appliance market but has been in danger for some time of becoming an also-ran. Its last significant product release was the TeraStation III over two years ago which was good value.

The new TeraStation Pro family of desktop appliances are the first from Buffalo to go beyond four hot-swap hard disks. Processing power also gets a boost as the TeraStation Pro is equipped with an Atom 1.66GHz D510 chip whilst memory has been increased to 2GB.

You can't buy diskless appliances, but Buffalo offers models with 8TB, 16TB and 24TB capacities. We have the 8TB model on review which uses eight Samsung HD103SI SATA disks and at just over a grand looks very good value. 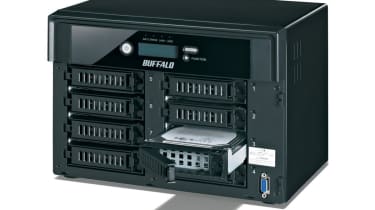 Build quality is good with the chassis made from solid steel and the hot-swap drive bays protected by a lockable front panel. Two large cooling fans are located at the rear, but they weren't loud as we found the appliance to be very quiet during testing.

The pair of Gigabit Ethernet ports support load balanced and failover teams and there are two USB2 ports for attaching external storage devices, printers or a UPS. Oddly, you only get a pair of USB3 ports on the new TeraStation Pro 6 Bay models which uses a variation of the same chassis.

Buffalo's NASNavigator 2 utility locates the appliance on the network and provides access to shares and a quick drive mapping service. The appliance's web interface can also be accessed from here. It's nowhere near as slick as those provided by QNap or Synology. Although it provides easy access to all features we found it could be sluggish at times.

The system comes preconfigured with all disks in a RAID 6 array which provides dual-disk redundancy. If you want more storage then it's easy enough to delete this and choose from stripes, mirrors or RAID-5 and the appliance supports four separate arrays as well.