Fujitsu's latest Windows 7 tablet has some useful hardware features, but unfortunately the whole is less than the sum of its parts. 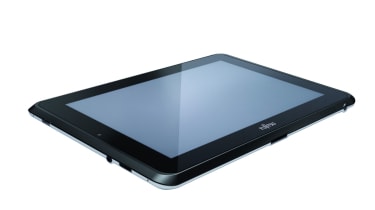 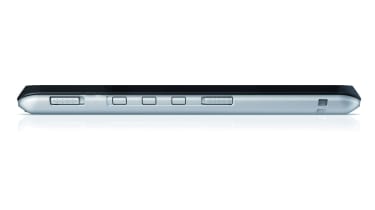 The side-mounted buttons on the right-hand side of the Stylistic Q550 are shortcuts for functions such as locking the sluggish orientation sensor or accessing the Windows Task Manager.

At least the 10.1in display is bright and has a high resolution of 1,280x800 pixels. It also has a matte finish so it doesn't reflect light from overhead sources easily which would otherwise cause distracting amounts of glare. This is a common problem on both rival tablets and laptops too, so it's pleasing that it's been avoided here. 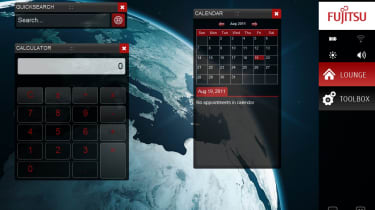 Although the Q550 is the first computer we've seen to have an Atom Z670 processor, don't get your hopes up when it comes to performance. Even though it's paired with 2GB of RAM, it struggled its way through our demanding benchmarks, scraping in with a very poor overall score of 4. We weren't expecting much from a Z-class Atom processor, but even we were surprised by how slow it was. Even rendering webpages in Internet Explorer sometimes proved a struggle, although it can at least play HD video smoothly. Worst of all the rear of the Q550 became uncomfortably hot to the touch when running our admittedly strenuous benchmarks.

If the 30GB SSD sounds small, that's because it is. With Windows 7 Professional, Microsoft Office 2010 and our 2GB set of basic benchmark files installed, there was just over 5.5GB of spare capacity left. Since Windows needs at least a couple gigabytes of spare hard disk space for a swap file you'll therefore need to be very careful about which files you copy over, make extensive use of SD cards and USB flash drives or rely on the cloud for file storage.

Although Windows tablets have always been niche products, we still had high hopes for the Stylistic Q550 given its robust build and useful security features. However, unless security is of overriding importance we can't recommend the Q550 due to its high price, short battery life and poor touchscreen.