The Motorola ad gets banned after it emerges the Samsung Galaxy S II i9100 is more powerful. 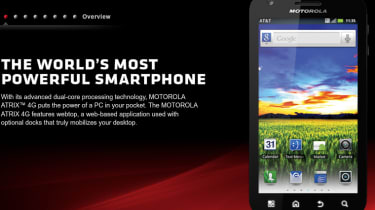 The Advertising Standards Authority (ASA) has banned a Motorola Atrix advert claiming it was the most powerful smartphone on the planet.

In response to the complaints, Motorola claimed it never said the Atrix had a faster processor, but the most powerful' description derived from the overall capabilities of the phone.

Because the Samsung Galaxy S II i9100 had a faster processor than the Atrix, we considered the claim The world's most powerful smartphone' had not been substantiated by comparative evidence.

Motorola which recently agreed to be acquired by Google focused on features such as the ability to run Windows on the phone with Citrix software, as well as a battery 20 per cent more powerful than all worldwide competitors.

"We considered most viewers would understand the claim The world's most powerful smartphone,' in context to a smartphone, to mean that the product had, among other features, a faster processor than any other smartphone. Because the Samsung Galaxy S II i9100 had a faster processor than the Atrix, we considered the claim The world's most powerful smartphone' had not been substantiated by comparative evidence and concluded that it was misleading."

Motorola adds to a long list of tech companies who have been caught out by the ASA.

Read on for our look at some of the most notorious tech advert fails.