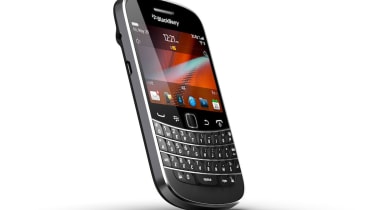 BlackBerry OS 7's improvements are largely incremental, but they are still welcome.

BlackBerry OS 7 brings digital compass support too, which means developers can now deliver augmented reality apps and improved location services, while OpenGL offers new gaming opportunities although how many business BlackBerry users are clamouring for Angry Birds and Infinity Blade is uncertain. Music lovers are also well catered for, with 8GB of onboard storage (plus microSDHC slot), although it's a shame RIM put the 3.5mm headphone socket at one side of the handset, since this makes it difficult to slip into a pocket when in use.

Unfortunately, even with 720p HD video recording, the new five-megapixel digital camera isn't much to get excited about, particularly on a smartphone launched mid-way through 2011. Picture quality is acceptable enough in good lighting, but rather grainy otherwise. While the lack of autofocus means the Bold 9900's camera is quick to snap a photo, it also means it struggles with shots that other smartphones handle with ease. Call quality is up to the usual high BlackBerry standard though.

As for battery life, RIM reckons the Bold 9900 is good for 6.3 hours of talk time, up to 12.8 hours of standby time and up 50 hours of music playback. We couldn't replicate the latter figure though, and only achieved 22.5 hours with all wireless radios switched off and the Bold 9900 doing nothing but playing MP3s on a loop.

With RIM's next-generation QNX-based operating system (BlackBerry OS 8, perhaps) not due until early next year and BlackBerry Enterprise Server support not expected to be added until some time after that, it looks like the Bold 9900 is going to be the top-of-the-line physical keyboard-equipped BlackBerry for some time to come. That makes it more than a little disappointing that RIM didn't do more to tip the balance back from the increasingly sophisticated competition from Apple and Android. There's still enough here to tempt current BlackBerry users into upgrading if for no other reason than it's the only way to get the new features BlackBerry OS 7 brings.

Although far from the next-generation BlackBerry some were expecting, the Bold 9900 is a reasonably compelling upgrade for existing users suffering from iPhone or Android envy. However, it’s nowhere near good enough to lure anyone, especially those who've never used a BlackBerry before, away from either of those platforms.