Why IT should fear Schmidt’s education warning

Eric Schmidt has lambasted the British education system. Should IT departments be worried? Tom Brewster thinks so... 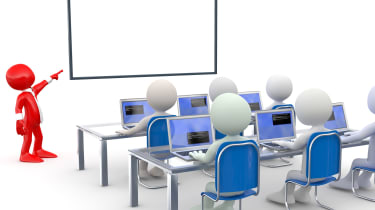 COMMENT It's hard to take criticism. Even more so when it's your own country being slammed by a denizen of another nation.

No doubt many patriots are seething at Google chairman Eric Schmidt's comments on UK education. In Edinburgh, the former CEO claimed the education system was not inspiring enough kids to learn science, maths or engineering skills, hindering the chances of producing a future digital genius.

Schmidt said the UK had a long history of innovation, yet now there were no British leading lights in the digital arena, according to a BBC report.

This country's educational infrastructure has already failed produce the next big thing in the digital world. Where's our Mark Zuckerburg?

"The UK is home of so many media-related inventions. You invented photography. You invented TV. You invented computers in both concept and practice," Schmidt said during the MacTaggart Lecture at the Edinburgh International Television Festival.

"It's not widely known, but the world's first office computer was built in 1951 by Lyons' chain of tea shops. Yet today, none of the world's leading exponents in these fields are from the UK."

Can we possibly disagree with Schmidt's assessment? The figures would suggest not.

There's no doubt this country's educational infrastructure has already failed produce the next big thing in the digital world. Where's our Mark Zuckerburg? Where's our Bill Gates?

Yet a more perturbing aspect of this tech apathy in schools is the skills gap it will leave in its wake. When there aren't enough younglings to fill spaces in IT departments, we'll know we're in trouble. Already there are gaps, in particular in the security space, as highlighted by the birth of the Cyber Security Challenge.

What does all this mean for IT departments though?

If the Government can't stimulate a digital renaissance in the UK's youth, we won't only be left with a dearth in tech power houses like Autonomy, companies across the land will suffer from a lack of IT prowess.

As everyone in the industry has been reiterating over the past decade, IT needs to be included in top-level decisions. Technology is driving innovation across the world, so businesses need competent IT departments who can inform business strategy as a whole.

But if the quality of personnel is non-existent, if the education system isn't spawning IT leaders with both technical expertise and honed business skills, then organisations won't want to include CIOs in big strategy changes.

Instead, they will look to outsource to other nations, they will look to exploit the cloud with vendors from Schmidt's home country. If we can't supply IT departments, we certainly won't be able to fill vendors with quality workers either.

So Schmidt was right. And IT departments should be worried about their future.