HP's consumer laptops look stylish, so it is no surprise that we're beginning to see a new flair for design in the company's enterprise models as well. With its rounded corners and plenty of brushed aluminium, the ProBook 4530s certainly stands out from other business laptops, but does it sacrifice usability for style? Tom Morgan finds out. 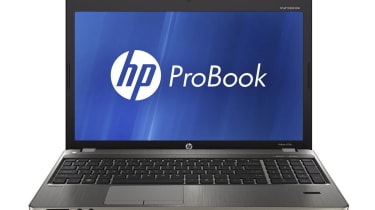 Neither the keyboard nor the touchpad is back lit, and there's no spotlight embedded in the display bezel like the ones seen in HPs EliteBook range, so you could find typing in dark conditions a little difficult. Thankfully the 15.6in screen is bright enough to make this a minor issue rather than a serious problem.

The screen's matte finish makes it easier to use in direct sunlight, or under harsh office lighting.

The display itself has a 1,366x768 resolution display that's standard for most 15in laptops. There's just enough space to work on two documents at once, but you won't be able to view large Excel spreadsheets without scrolling. Connecting an external monitor to either the VGA or HDMI ports will make this easier. The screen's matte finish makes it easier to use in direct sunlight, or under harsh office lighting, but contrast levels were slightly low as a result. Viewing angles were reasonable, and there was more than enough screen tilt to make working on a cramped plane seat a possibility.

Despite its excellent performance, design and usability, the ProBook does have a few, relatively minor flaws.- HP has made some sacrifices to connectivity. There are only four USB2 ports, none of which support the faster USB3 standard, alongside a multiple-format card reader and ExpressCard/34 slot. If you need FireWire, a 3G modem or any other connection, you'll need to use an expansion card. Thankfully there's still a DVD re-writer, so you won't to connect an external drive. Certain versions of the 4530s include a modem, but on our review sample the port hole was blocked by a non-removable cover.