Toshiba has unveiled its first super thin Ultrabook laptop design and Seth Barton was there to weigh it up and form his first impressions. 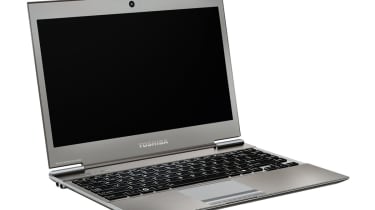 There's been a lot of talk about Intel's Ultrabook platform, even if it simply boils down to a series of specifications designed to encourage laptop manufacturers to compete with Apple's MacBook Air and Pro models.

We managed to grab a sneak peek of Toshiba's first Ultrabook design. Ultrabooks have to be less than 20mm thick, but Toshiba has gone well beyond that with the 15.9mm Satellite Z830. That makes it the thinnest Ultrabook to date, though we doubt it'll keep that title for long. 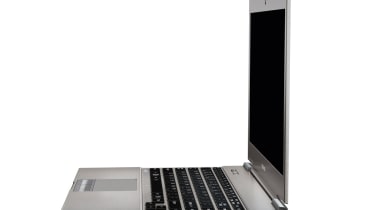 The Satellite Z830 is very thin.

Undercutting the Z830 will come with its drawbacks though. This latest Satellite is just thick enough to provide three full sized USB ports along its edges (two USB2 and one USB3). There's also Ethernet, HDMI, VGA and a card reader. 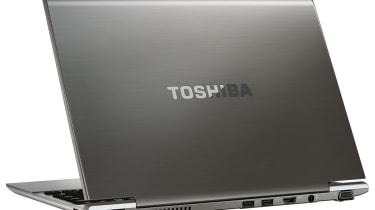 The ports on the rear of the Satellite Z830.

Any thinner design will have to resort to clever design such as hinged ports behind flaps, but despite its slender dimensions it feels sturdy and practical as well as super thin. This is a very portable design, especially given its 13.3in display size. It weighs just 1.12kg, making it the lightest Ultrabook to date, and one of lightest laptops we can think of. Full dimensions weren't supplied, and we weren't carrying a tape measure unfortunately, but it certainly sits somewhere between Apple's 13in MacBook Air and Pro designs. 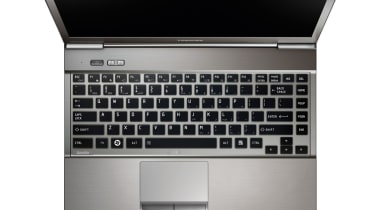 The backlit keyboard on the Satellite Z830 feels very comfortable.

The screen lid does have a lot of flex, but that's no surprise at these dimensions. The backlit keyboard felt good with positive feedback despite its minimal travel. The chassis is made of a magnesium alloy, much like Panasonic's Toughbook line.

Toshiba was very circumspect on the actual specification. Apart from featuring an Intel processor and either 128GB or 256GB SSD, more detailed specifications including battery capacity and expected battery life figures were unavailable.

It all adds up to a very attractive package. Toshiba doesn't seem to have made any significant compromises for the sake of a slender design, and if the pricing is right this could be a very strong contender - though it's still early days of course.

The Toshiba Satellite Z830 is the most promising Ultrabook design we've seen so far, if only because it doesn't slavishly ape the MacBook Air. Much depends on pricing and battery life though which we won't be able to judge until final production models arrive in the UK later this year. 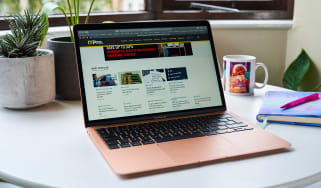