Dell wants to convince small businesses to throw out their old desktop and get a real server instead. Dave Mitchell thinks its latest Xeon E3 equipped PowerEdge T110 II is a good choice as a first server - read his review to find out why. 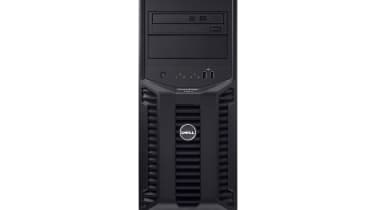 Thanks to its low power Xeon E3 processor, the T110 II is light on power consumption too. Using an in-line power meter, we clocked the review system drawing only 38W with Server 2008 R2 Foundation in idle. This rose to 110W when under pressure from the benchmark application SiSoft Sandra.

The server's side panel is removed easily by pushing back a locking lever on the top panel and this can be padlocked shut. The hole on the locking tab is also large enough to accept a security cable to stop the server itself being nicked. 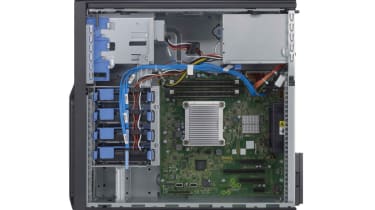 Internal design is very tidy and the server has room for up to four 3.5in hard disks which are mounted in a cold-swap cage at the front. Each drive is fitted in a plastic carrier which we found easy to remove and combined power/interface cables are fitted next to each bay. Dell advised us that it is making a version available that will support up to six 2.5in hard disks as well.

Hard disk controller options start with the embedded PERC S100 controller which requires the hard disks to be cabled directly to the motherboard's SATA ports. This supports striped, mirrored and RAID 5 arrays and is sufficient for small businesses that don't want expensive SAS hard disks.

Our system included the PERC S300 PCI Express card which costs 73 and supports up to eight 3Gbit/s SAS, near-line SAS and SATA hard disks. And then for 90, there's the H200 PCI-E card which we don't recommend for this server. Although it supports expensive, high-performance 6Gbit/s SAS disks, it supports RAID 10 but not, oddly, RAID 5.