Samsung extends its Galaxy brand of Android smartphones with a keyboard-equipped Blackberry lookalike, but Julian Prokaza is far from impressed. Read on to find out why. 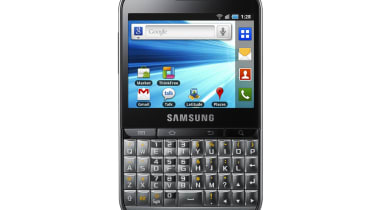 The Samsung Galaxy Pro is definitely a entry-level handset.

To be fair, the Galaxy Pro seldom feels sluggish in use, perhaps because of the meagre amount of pixels and simplistic UI that the unnamed processor is pushing around, but performance benchmarks tell a different tale. In the Quadrant Standard combined CPU/3D graphics test, it scored a mere 668, which is over 2,000 points slower than the Galaxy S II. Grimmer still was its result in the SunSpider JavaScript benchmark, where it completed the test in 30,977ms the Galaxy S II, along with other recently reviewed Android smartphones, completed it in one tenth of the time.

Battery life, thankfully, is better and the Galaxy Pro lasted for just over nine hours when playing MP4 video in a loop in aircraft mode not that anyone would want to watch a movie on such a small and cramped screen. There are no complaints about call quality either, and conversations were loud and clear both in normal and speakerphone modes.

There isn't a great deal of choice when it comes to Android smartphones in this form factor and, unfortunately, the Samsung Galaxy Pro does little to change this though that isn't to say the similarly specified HTC ChaCha and Acer beTouch E210 are any better. Anyone desperate for an Android device with a physical keyboard would be better off considering the HTC Desire Z big-screen slider; its specification is only marginally better, but it has far fewer usability compromises.

If there's one thing in the Samsung Galaxy Pro's favour, it's the price. The device is available unlocked for 159 ex VAT (which sits between the unlocked prices of the Acer beTouch E210 and HTC ChaCha) and it's free from Three on a 15 per month two-year contract.

The Samsung Galaxy Pro is cheap, but not particularly cheerful and while it’s probably adequate for someone who’s never used a smartphone before and wants the comfort of a physical keyboard, more sophisticated users should steer clear.