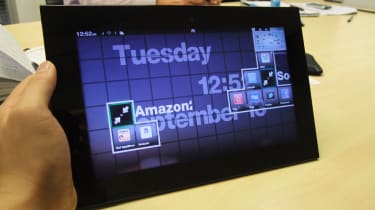 Fusion Garage isn't a household name and if the company is remembered for anything, it will be for its dreadful first attempt at a tablet, the JooJoo. The company is taking another stab at the tablet market with new hardware and a new operating system the Grid10 and the GridOS respectively.

The Grid10 will come with 16GB of storage, either with or without 3G. The 3G version will weight 690g, while the 3G-less model will be 10g lighter. Although this is nearly 100g heavier than the iPad 2, the Grid10 feels surprisingly light. Even though the unit we tried out was a pre-production sample, the black design with its curved rear felt surprisingly robust even if it wasn't especially thin. It has the usual specification we've come to expect from an Android Honeycomb tablet an Nvidia Tegra 2 processor and a 10.1in screen although it does have a slightly higher than usual resolution of 1,366x768 pixels. 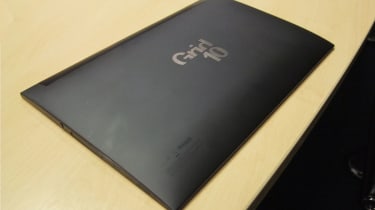 Despite Fusion Garage's insistence to the contrary, the Grid10 is essentially an Android tablet - the company's GridOS is a very heavily modified version of Android Honeycomb with a brand new user interface. There aren't any physical buttons, so Blackberry Playbook-style gestures are used to navigate the operating system. To return to the Home Screen from any app, simply swipe downwards from the top bezel with two fingers. To go back to any previous screen, swipe from the right with two fingers. Swipe from the left with two fingers to bring up the Notifications, upcoming calendar events and app switcher screen. 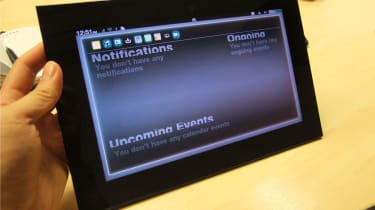