The provocatively named N5200XXX is one of a range of new NAS appliances from Thecus and claims to be extreme in every way. It hits the spot when it comes to price and in this review Dave Mitchell finds out whether it’s on target for performance and features as well. 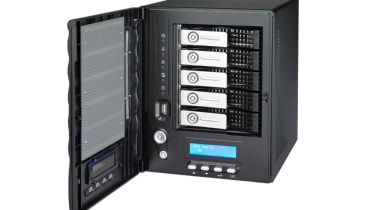 Thecus catches up with vendors such as QNap, Synology and Netgear as the N5200XXX now has a 1.8GHz Atom D525 processor partnered with 1GB of DDR3 memory. Other physical changes aren't as significant - the USB port count increased from three to five.

However, unlike the QNap TS-559 Pro II, none of these are of the USB3 variety. Another point to consider is that although the N5200XXX can handle 3TB SATA drives, it doesn't support new SATA3 models whereas the TS-559 Pro II does.

The front panel hasn't changed at all with a backlit LCD display providing system, network and disk status information and a keypad below allowing you to carry out basic configuration. Chassis cooling is handled by a large fan at the rear and we found that although noise levels are low, it's not totally silent. In a busy office environment the appliance won't be heard, but in a quiet room it will be noticeable. 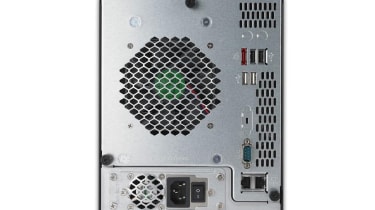 The ports on the rear of the Thecus N5200XXX.

The review system was supplied to us by Origin Storage and came with five 1TB WD GreenPower SATA2 hard disks. Costing 648 ex VAT, this is superb value. A diskless model costs just 456 whilst a 15TB version costs 1,268.

Installation is swift as Thecus' Setup Wizard locates the appliance and provides quick access to the main web interface. The interface isn't quite as slick as QNap's or Synology's, but is still very easy to use.

There's a good choice of RAID arrays with support for JBODs, mirrors, stripes, RAID 5 or dual-disk redundant RAID 6. For testing we created a five-disk RAID 5 array which took around six hours to build. However, after the initial formatting process, the array was made available for use after about twenty minutes.