HP's ProLiant DL120 G7 is aimed at SMBs replacing their old tower servers with rack models and for running dedicated apps in the enterprise. In this exclusive review Dave Mitchell finds out if HP's first Xeon E3 entry-level rack server is a capable dual purpose system. 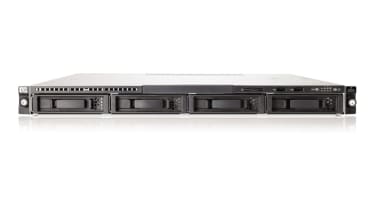 HP's new DL120 G7 is its first rack model to support Intel's Xeon E3 processors and targets SMBs that want to upgrade their old servers and consolidate everything into a tidy rack cabinet. Enterprises are also on HP's agenda as this server can be used as a low-cost, low-power system dedicated to single applications such as web or mail services.

The 1U rack chassis hasn't been redesigned as HP has updated the sixth generation DL120 by dropping in a new motherboard. At 70cms deep, it'll fit in a standard rack cabinet but SMBs with smaller data cabinets should consider Dell's PowerEdge R210 II which is only 41cms deep.

A benefit of the deeper chassis is improved storage options with the base model supplied with four 3.5in hot-swap drive bays. There's also a version that has eight 2.5in bays which HP offers as a configure-to-order option with a two to three week turnaround.

For the four drive model, connection options start with the embedded six-port SATA controller. This provides a four-port connector which is cabled directly to the drive backplane and a couple of separate SATA interfaces for devices such as a DVD-ROM kit which costs 65. HP's embedded Smart Array B110i RAID controller is activated from the BIOS. It supports stripes and mirrors, but if you want hot-plug capabilities you'll need the extra Advanced Pack upgrade. 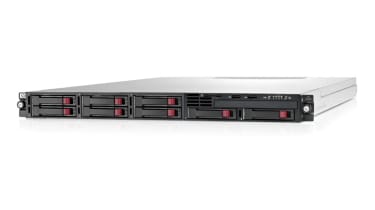