HP's latest ultra-portable business laptop may look like an Apple-knockoff, but it's a desirable computer in its own right. 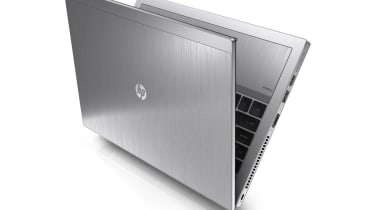 Due to the presence of the SSD, we expected long battery life from the ProBook. However, it lasted just over six hours in our light usage web browsing test. Although this is quite good in its own right, lives up to HP's claimed battery life of five hours and 45 minutes and is just long enough to last a transatlantic flight, we've seen other ultraportable laptops last even longer some without the aid of an allegedly power-efficient SSD.

The SSD has the advantage of being sturdy due to its lack of moving parts ideal for use in a laptop.

Although the 13.3in screen's viewing angles are a little restricted, we were pleased to find that it is at least bright with a matte finish. This should make it easier to use when placed under overhead lights which would otherwise cause distracting amounts of glare on a screen with a glossy finish. The screen only has a resolution of 1,366x768 pixels though a higher resolution of 1,440x900 would've been better for use with palette/window-heavy applications.

HP has managed to make its ProBook-range cheaper than the higher-end EliteBook range by leaving out features such as an ExpressCard slot, smartcard reader and FireWire 400 port as well as a rugged design matching US government military specifications. Although there aren't any USB3 ports, the 5330m still has HDMI and VGA outputs, an integrated 3G modem with the SIM card slot hidden underneath the battery and a fingerprint reader. If you don't need the integrated 3G modem, an otherwise identical 3G-less 5330m costs 100 less.

There are plenty of other security features implemented in software. Disk encryption and file shredder utilities are preinstalled as is a tool for managing email identity certificates. It's also possible to disable the USB2 and eSATA ports, as well as the memory card reader, to make data leakage less likely.

Despite initial appearances, the battery is user-replaceable - it's merely hidden behind an easily removable panel. Unscrewing another panel gives access to the memory with a spare slot for adding another 4GB and the 2.5in SSD, although many business will leave servicing up to HP which offers a wide range of extended warranties with varying levels of service and length.

The HP ProBook 5330m would be an excellent ultraportable laptop if only it had the long battery life to go with its sturdy, attractive design and good specification. As such, it's just a good laptop rather than a superb one. If you can live with its comparatively short battery life or just need a fast processor, it's a good alternative to the MacBook Air. If applications performance is entirely unimportant, the considerably cheaper Sony Vaio Y series has longer battery life making it a great budget alternative.