The 3M MP180 has a touchscreen, apps and built-in WiFi - surely it's the perfect pocket projector? Unfortunately, Jim Martin discovers that it's far from perfect in our review. 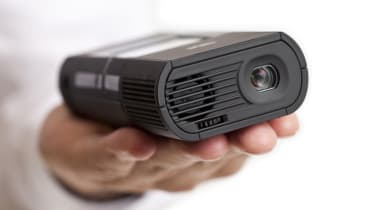 Despite the price, a remote control is merely optional, leaving only the touchscreen for controlling presentations and media playback. This is ok if you're just using the flip-out front foot, but the bundled mini tripod isn't sturdy enough to keep the image still while you're poking the screen. 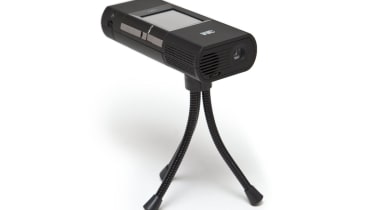 The bundled mini tripod isn't sturdy enough to keep the image still while you're poking the screen.

At least the two-hour battery will outlast any presentation, even if it takes three hours to charge up again, and the stereo speakers are nice and loud, even if they lack bass. Also, despite being based around DLP technology, we didn't notice the rainbow effect, which is where your eye can detect the red, green and blue flickering as the internal LED cycles between the colours.

It's worth noting that the MP180 is considerably larger and heavier than most pocket projectors. At 336g, it's hardly heavy, but Samsung's SP-H03 weighs just 210g including the battery that lasts just as long as the MP180's. As it's a similar size and shape to a large glasses case, it will just about fit in a jacket pocket, but the SP-H03 is much smaller.

It's commendable that 3M has gone further with the MP180 than any other pico projector before it, but the price reflects this. Given the unusable web browser, relatively poor image quality and whiny fan, Samsung's SP-H03 is still the better choice. It too has a built-in media player and a battery that lasts for two hours, but it also has slightly better image quality, it's more compact and is cheaper at around £200.