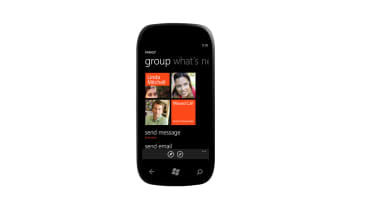 Windows Phone 7 is still a relatively new smartphone platform. Sure, Windows Mobile was a favourite among business users before the likes of BlackBerry, Symbian and iPhone took off, but Windows Phone 7 reinvented the way Microsoft's mobile operating system works.

Windows Phone 7 was designed to capture a sector of the market Windows Mobile didn't - consumers and, as such, the first iteration was very consumer-focused, taking multimedia and an easy to use UI to the masses.

Many business IT folk will be fine with the functional durability of Windows Phone 7, but the real issue is user appeal and, bluntly, the historical lack of it.

However, Microsoft hadn't completely neglected the business market. It packed in a range of features business users may be impressed by, including compatibility with much of the software those using the device for business (such as Microsoft's SharePoint document sharing suite and, coming soon, Office365) and instant compatibility with Exchange servers via the Outlook app and calendars.

As it stands, RIM is still the leader in business mobiles thanks to its secure environment and seamless server integration, but Microsoft's Office365 integration may just bring some of those fans back."

But how can Microsoft compete with BlackBerrys and iPhones platforms businesses are starting to rely on more and more?

"The main advantage [of Windows Phone] over others is the close link to other Microsoft products, in particular Office and SharePoint and, soon ,365," said Rob Bamforth, an analyst at Quocirca. "So for those already with strong Microsoft use elsewhere, there is familiarity and solid integration. However, this can be achieved with other mobile platforms too."