The world's first 4TB external hard disk – a milestone or a tombstone? Alan Lu finds out in our review. 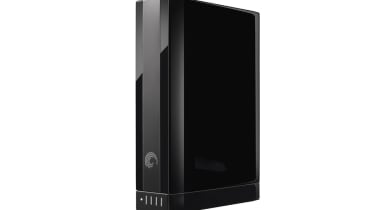 It's not often we get excited about a hard disk, but when it's the world's first 4TB hard disk then we'll make an exception. Sadly, the GoFlex Desk is an external USB3 desktop disk rather than an internal disk that could be fitted inside a server, but it's still notable for having so much storage.

Although the GoFlex Desk range has been around for a while, the design has been refined. The 4TB model has a more angular appearance compared to the curvier look of older models.

One aspect that hasn't changed is the GoFlex connector. The base of the hard disk with the USB3 port detaches so you can connect a range of adapters for other interfaces, such as eSATA or FireWire 800 for systems without USB3, and potentially newer standards such as Thunderbolt. This flexibility could be attractive if you plan to keep the disk around for a while. Although the GoFlex connector is a barely disguised SATA port, the opening is too narrow to allow it to be connected to a PC directly over SATA.

The base of the hard disk with the USB3 port detaches so you can connect a range of adapters for other interfaces, such as eSATA or FireWire 800.

Seagate doesn't state the specifications for the internal disk inside the 4TB GoFlex Desk, but judging from our benchmark results we suspect it may be a model with a 5,400rpm or variable spindle speed. We've seen USB3 desktop 7,200rpm disks reach speeds of 100MB/s or more, but the 4TB GoFlex Desk struggled to reach 70MB/s when reading and writing small files. It came close to 100MB/s when reading large files, but couldn't quite reach 80MB/s when writing them. It's still a fast disk, but it's not as quick as other, albeit lower capacity disks.

We have our concerns about cooling. Like previous models, the 4TB GoFlex Desk relies entirely on passive cooling there's no fan of any kind. Although this makes it very quiet and it didn't become uncomfortably hot during extended use, we would be hesitant to use the GoFlex Desk for projects which require heavy, constant disk access, especially in offices with less-than-perfect ventilation.

Included on the disk itself is a Seagate-branded lite version of Memeo's AutoBackup program. It's not going to replace any dedicated backup software you already use, but this little app can backup your files automatically in the background while you work and also supports incremental backups, so it potentially could still be a useful extra.

At 6p per gigabyte, the 4TB Seagate GoFlex Desk isn't extortionately priced for a first-of-its-kind massive capacity disk. It's not suitable for all projects and it's not quite as fast as we'd like, but if you need 4TB of storage in one box and can live with its limitations then it's a good choice. If you can wait though, we suspect other manufacturers will be introducing their own 4TB external disks soon.