Iomega's StorCenter px6-300d is the company's first desktop NAS appliance to use an Atom processor and support RAID 6. It claims to provide every network storage facility an SMB could need and in this review Dave Mitchell finds out if its performance is as compelling as its features. 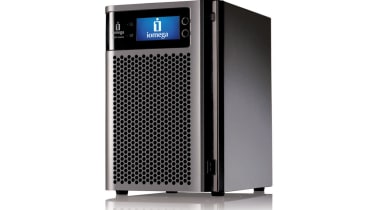 Since EMC became the driving force behind Iomega we're seeing a lot more momentum with its StorCenter NAS appliances. The px6-300d is its new flagship desktop system and along with support for six hard disks, there are a wealth of features aimed at small businesses, including enhanced backup facilities and cloud storage for remote users.

Along with a dual-core 1.8GHz Atom processor, it comes with a healthy 2GB of DDR2 memory and includes a fast USB3 port at front. The main chassis is solidly built with the exception of the front door which feels rather flimsy and, along with the hot-swap drive carriers, can't be locked. 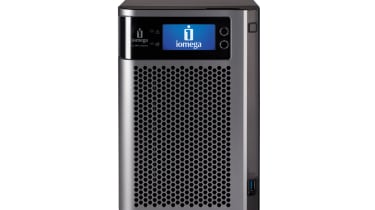 The main chassis is solidly built with the exception of the front door which feels rather flimsy and, along with the hot-swap drive carriers, can't be locked.

Two large fans provide all cooling and are quiet enough, although we're not keen on the external power supply as it looks too easy to accidentally pull out its small connector plug. The bold, backlit LCD panel is easy to read and provides plenty of status information.

Two buttons alongside can be used to access basic configuration menus and to copy files off storage devices inserted in the front USB3 port. Called QuikTransfer, this appears on the display as soon as a device is plugged in. If you run it, the entire contents of the device are copied directly to a predefined folder on the appliance.

We tested this with a Super Talent Express Drive Duo USB3 stick and QuikTransfer copied a 2.52GB video file to the appliance at an average of 46MB/s. We ran the same test with a USB2 stick and saw this take over twice as long with an average speed of only 21.5MB/s.

Iomega supplied us with the 12TB model which comes as standard with six 2TB Hitachi Deskstar SATA3 hard disks. Although the appliance only has SATA2 interfaces, we suspect your network infratstructure is more likely to be the bottleneck in any file transfer performance problems than the speed of the hard disk interface.