Repairing faulty computers at a high-profile event such as the Olympics isn't just a matter of having spare computers on hand though. Approximately 300-400 server specialists and desktop technicians will be available throughout the Games. Although some have had experience of previous Games, all are trained not only in any new technologies but also in procedures unique to the tight security and lightning-fast response times needed for the Olympics. Trainor estimates that, depending on the type of computer in question, a failure rate of 1 to 3%. 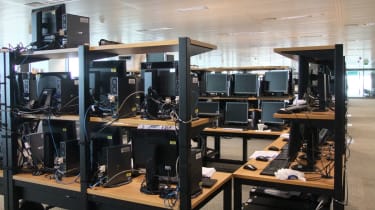 One of the countless cells, or collection of computers dedicated to a single event or other purpose, ready for testing at the Integration Test Lab.

Only 1-3% of the support staff are from outside the UK and there are five apprentices and five interns learning the ropes. These apprentices and interns will first cut their teeth at other, smaller non-Olympic events before working on Games-related tasks under supervision. Although much has been said about the science and technology skills shortage in the UK, Acer project manager Todd Olson, who has experience of four Olympic Games, had nothing but praise for the quality of his apprentices and interns. 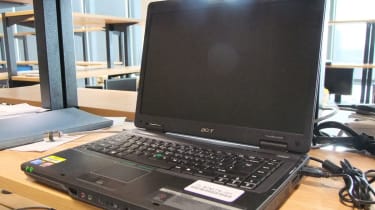 The Acer TravelMate 6593G. Its 2.53GHz Intel Core 2 Duo P8700 processor, 2GB of RAM, 250GB hard disk and ATI Mobility Radeon HD 3470 graphics card may be old hat compared to the latest models, but computing at the Olympics is about more than specs.

Although all the computers may be Acer-branded, the Taiwanese giant doesn't work in isolation. As well as liaising with LOCOG and Omega, Acer also works with all the other sponsors providing technical equipment and infrastructure for the Games. This includes Panasonic responsible for audio-visual systems, BT responsible for communications, Cisco which is handling network infrastructure and Atos Origin, the firm responsible for the software and for overseeing and managing all Games IT infrastructure.