Previous versions of Parallels Desktop and VMWare Fusion were compatible with any Intel-based Mac, but these new versions are 64-bit-only and so need a Mac with a Core 2 Duo, Core i3/i5/i7 or Xeon processor. This is unlikely to be a problem for most users still attached to older Core Duo Macs will probably be able to get by fine with older versions of either Parallels Desktop or Fusion. 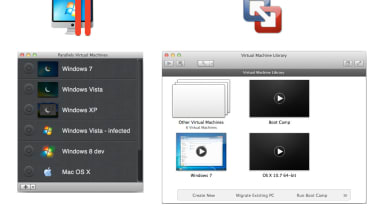 Virtual machines are created and managed from the main application window, but Parallels Desktop 7 does a better cosmetic job of this.

Installation of both applications is swift, with nothing in the way of user configuration required Parallels Desktop 7 uses an installer, but VMWare Fusion 4 is simply a file that must be dragged into the Mac's Applications folder. Once run, both applications then display a list of virtual machines in a management window, which is obviously empty for a first-time installation.

Anyone contemplating virtualisation software as a way to retain access to an old Windows PC after switching to a Mac will be well-served by both Parallels Desktop 7 and VMWare Fusion 4 both offer a migration option to virtualise a now-redundant PC in OS X rather than keep the hardware to hand. 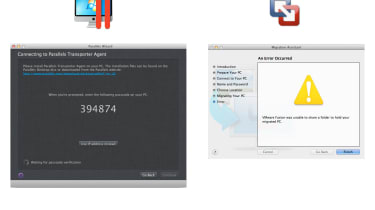 Both Parallels Desktop 7 and VMWare Fusion 4 can 'migrate' a complete Windows installation from an old PC, turning it into a virtual machine.

Parallels Desktop 7 Migrations can be performed using a Parallels USB crossover cable (supplied as part of the Parallels Desktop 7 Switch to Mac Edition), over a local network connection or by using data stored on an external drive. Whatever the method deployed, the free Parallels Transporter Agent takes care of the data transfer on the Windows or Linux side and it's a painless process. Once complete, a near-perfect clone of the old computer is instantly available as a virtual machine.

A local network connection is the only way to migrate the contents of a physical PC into a VMWare Fusion 4 virtual machine. This requires the PC Migration Agent tool to be running on the Windows PC (Linux is not supported), but the transfer wasn't quite as smooth as with Parallels Desktop 7 using the same source PC it refused to start because of a cryptic problem regarding folder sharing that neither the tool, nor the VMWare Fusion support site, could explain.

Winner: Parallels Desktop 7, since it painlessly migrated a PC into a virtual machine, while VMWare Fusion 4 would not.