Earlier versions of Parallels Desktop and VMWare Fusion couldn't virtualise non-server versions of OS X but only because Apple didn't allow it. Apple relaxed its rules about virtualisation with the launch of Lion though, and according to its licence agreement, this new version of OS X can now be installed on up to two virtual machines. As a result, both Parallels Desktop 7 and VMWare Fusion 4 now support virtualised Lion machines. 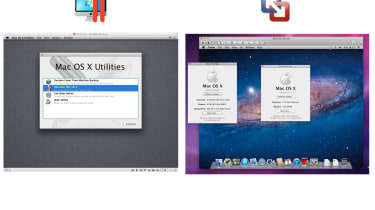 Lion can now be virtualised in both applications, and even run on a machine running an older version of OS X.

Since it's only available as a download from the Mac App Store, virtualising Lion isn't quite so straightforward as other operating systems. The easiest option with Parallels Desktop 7 is to boot a new virtual machine from the host's Lion recovery partition, after which the (now virtualised) recovery environment can be used to download the OS all over again for a clean install, or restore it from a Time Machine backup.

However, these two options obviously require access to a Mac that's already running Lion, but Parallels Desktop 7 can also install the OS from a USB flash drive confusingly accessed from the "Install Windows" option of its new virtual machine dialogue box. This wouldn't work with our homemade drive though, and we didn't have Apple's official OS X Lion USB Thumb Drive on hand to try it with. Thankfully, Parallels Desktop 7 did accept the InstallESD.img file inside the Lion installer .app file as a valid OS image file, though.

VMWare Fusion 4 isn't quite as flexible when it comes to installing Lion, but it did work directly with the Lion installer .app file without any need to open the package and point it at the enclosed image file. VMWare Fusion 4 also successfully virtualised Lion on a host Mac running Snow Leopard, making it a useful and risk-free way to assess the new OS.

Winner: Parallels Desktop 7 is a little more flexible when it comes to installing Lion, but not in any significant way and performance is much the same as with VMWare Fusion 4, so this is a tie.