With a virtual machine set up by whatever means, both Parallels Desktop 7 and VMWare Fusion 4 offer two main ways of working. The easiest is to keep the guest OS contained within a window on the Mac Desktop for use like any other Mac application, and that window can be any resolution and even made full-screen. Rather than leave it running all the time, both applications can also instantly pause' a running virtual machine, which freezes its state and releases any resources it was using; it can then be quickly reactivated when required. Both applications use the same terminology for this trick, but the pause button VMWare Fusion 4 puts on the toolbar in its virtual machine windows is nothing of the sort it actually triggers the suspend to disk' mode. 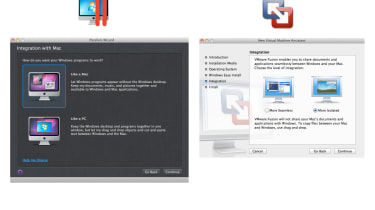 Parallels Desktop 7 and VMWare Fusion 4 both offer two ways of working with a Windows guest OS, depending on the degree of integration with OS X that's required.

If virtual machine applications are to be in constant use, then both Parallels Desktop 7 and VMWare Fusion 4 can also integrate the guest OS into OS X. Parallels Desktop 7 calls this Coherence' mode, VMWare Fusion 4 calls it Unity', but once enabled, both hide the guest OS Desktop and display any open guest application windows just as if they were OS X applications they're even visible in Mission Control. To avoid confusion, both applications also share a Clipboard between guest and host, map Mac keyboard shortcuts (copy, paste and so on) to their Windows counterparts and assign web and email links that may appear in the guest OS to open in Mac applications. 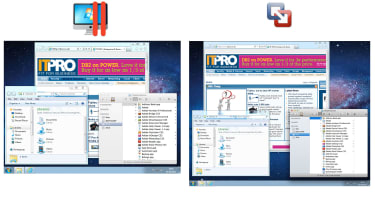 Both applications can display an optional Taskbar somewhere on the Mac Desktop to make Windows easier to use in this mode. Both can also leave a guest OS applications menu in place, even when the virtual machine isn't running, for quick access to virtualised software (Windows applications can also be dropped into Lion's iOS-like Launch Pad). 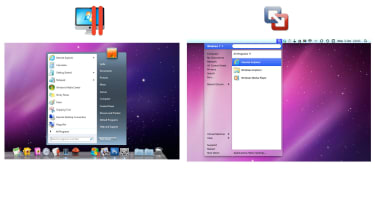 Both applications can place a Windows Start menu on the OS X Desktop, but only Parallels Desktop 7 renders it faithfully.

Parallels Desktop 7 goes further in this regard though, and can display icons for both the Start menu and any running virtualised applications on the OS X Dock, and put the contents of the Windows Notification Area into the OS X menu bar. Virtualised applications can also be pinned to the Dock alongside Mac ones to blur the line between operating systems still further, but the amateurish-looking option to skin Windows applications to make them look like OS X ones is perhaps a step too far.

Winner: Parallels Desktop 7 by a small margin, thanks to its extra options for incorporating elements of the Windows UI into OS X.