When in windowed mode, both Parallels Desktop 7 and VMWare Fusion 4 allow files to be dragged between host and guest Desktops for sharing data.

Both can also share Mac folders with a virtual machine. Only Parallels Desktop 7 can share guest folders with the Mac though, and it's unique in its ability to automatically map mounted Mac volumes to Windows drives. 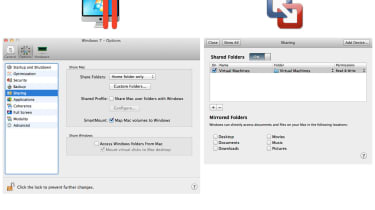 Parallels Desktop 7 and VMWare Fusion 4 can both share folders and other resources with a guest OS.

Unlike Parallels Desktop 7, VMWare Fusion 4 can't completely isolate a virtual machine from the host Mac - even with file sharing disabled, files can still be dragged to a guest OS Desktop.

Guest access to the Mac's hardware requires more in the way of user intervention in both Parallels Desktop 7 and VMWare Fusion 4, but for obvious reasons. Plug in a USB device, for example, and both applications will offer to connect it to the Mac or the currently running virtual machine, although Parallels Desktop 7 uses a clear graphical dialog box for this. Virtual access to the Mac's optical drive is accessed in a similar manual fashion, but both applications seamlessly switch mouse and keyboard control between host and guest OS as required. Both also support guest access to the Mac's web cam too, but only VMWare Fusion 4 can share its Bluetooth adapter.

Winner: Parallels Desktop 7 for its extra sharing options and the added security of being able to isolate a guest OS from the Mac.

To avoid the need for remedial action or a complete OS reinstall when something goes badly wrong in a virtual machine, both Parallels Desktop 7 and VMWare Fusion 4 offer a snapshot' function. This quickly saves the current state of the virtual machine for restoration at any time, so a catastrophic OS error can be easily undone. That assumes an suitable earlier snapshot was made of course, but both applications allow snapshots to be taken at specified intervals, with older ones deleted automatically to preserve hard disk space. 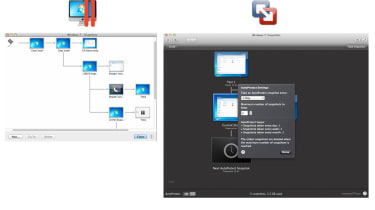 Parallels Desktop 7 and VMWare Fusion 4 can both take snapshots to record the state of a virtual machine for later restoration. Snapshots can be taken automatically if you wish.

Later snapshots don't need to be deleted when rolling back an earlier one, so, for example, you could maintain snapshots of mutually incompatible software that need to be installed. This means it's possible maintain several states of the same virtual machine, all accessible from a clear tree view that shows thumbnails for each snapshot. Winner: Tie both have identical snapshot options.