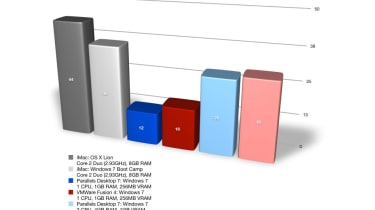 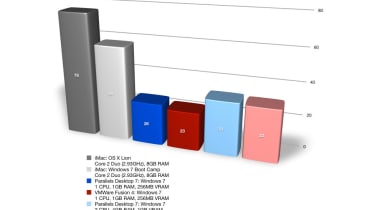 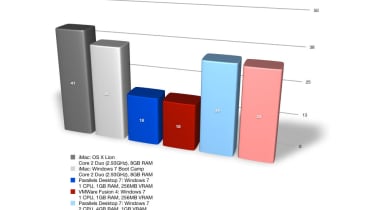 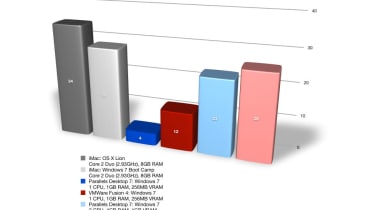 Virtualised 2D applications performance is obviously slower than that of the iMac running either OS X Lion or Windows, but the overall benchmark results for a two-processor, 4GB RAM configuration in both Parallels Desktop 7 and VMWare Fusion 4 weren't that far behind the iMac's native Windows 7 Boot Camp performance.

VMWare Fusion 4's overall results were a little higher than Parallels Desktop 7's, but the differences between the individual benchmarks are less marked. Parallels Desktop 7's overall score was dragged down by its lesser multi-tasking performance (particularly in its one processor configuration), but its image and video editing test results were both equal to, or higher than VMWare Fusion 4's. 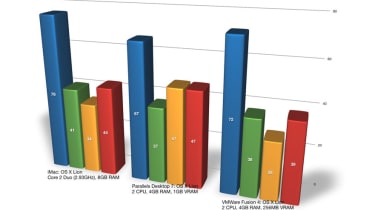 Impressively, virtual Lion performance isn't really that far from the host Mac for 2D applications and Parallels Desktop 7 actually scored higher in the multi-tasking benchmark than the 2.93GHz dual-core iMac it was running on. In other words, both Parallels Desktop 7 and VMWare Fusion 4 make ideal virtual environments for running or testing Mac applications that can't (or shouldn't) be installed on a production Mac. 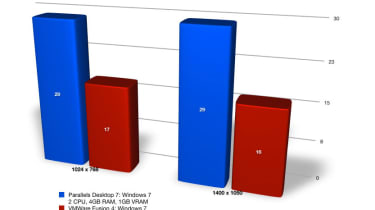 3D performance was measured using the game Call of Duty 4 not something that will feature in many offices, but it does place consistent stress on a computer's graphics card, virtual or otherwise. Parallels Desktop 7 maintained an average of 29 frames-per-second with Call of Duty 4 in its two processor, 4GB RAM, 1GB video RAM configuration at resolutions of 1,024 x 768 and 1,400 x 1050. The same hardware configuration in VMWare Fusion 4 (with its maximum 256MB video RAM), on the other hand, only reached average frame rates of around 17 at the same resolutions.

Parallels Desktop 7 does claw back some points in the performance stakes with a few extra options not found in VMWare Fusion 4, though. Performance can be prioritised for either the Mac or the virtual machine, depending on which needs the lion's share of system resources the most and the adaptive hypervisor' option will attempt the same balancing act automatically, depending on which OS is in use something that works well for Windows applications running in Parallels Desktop 7's Coherence mode. There's also the option to detune virtual machine performance to prolong battery life on a MacBook that's away from a mains socket.

Winner: VMWare Fusion 4 for its overall superior 2D multi-tasking performance, but Parallels Desktop 7 has a significant edge with 3D applications.

Parallels Desktop 7 is user friendly, it's flexible, it has easy to use options for setting up a new virtual machine and packs serious 2D and 3D performance. VMWare Fusion 4 isn’t quite so pretty, failed to migrate our PC and is relatively poor with 3D — but it’s currently almost half the price of Parallels (although this is allegedly a limited time offer). That alone gives VMWare Fusion 4 a very marginal lead for those considering mass deployments on tight budgets, but only for situations where its shortcomings won’t be an issue. Otherwise, Parallels Desktop 7 is the better choice, but only just.