An Android tablet with a built-in, slide out keyboard - the best of both worlds or a muddled compromise that pleases no-one? David Ludlow finds out in our review.

The essential problem with carrying a tablet round for work is that you inevitably need to get down to some proper typing and onscreen keyboards just don't cut it. Asus first attempted to address this problem with the Eee Pad Transformer, a regular Android tablet with an optional keyboard docking station, which was flexible, if a little bulky. 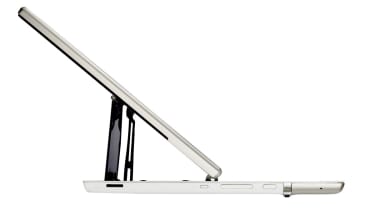 The mechanism behind the Slider's slide-out keyboard feels reassuringly sturdy.

For the Eee Pad Slider, Asus has gone back to the drawing board and come up with a tablet that has a keyboard hidden under the screen. Lifting the screen at the rear raises the rear on a pair of hinges, sliding the front back to reveal the keyboard underneath. It's fairly clever and the hinge mechanism feels smooth and tough. When the keyboard is exposed, the screen sits at around a 45-degree angle. It's just about right for using it on your lap or on a desk, which is handy as there's no adjustment possible. 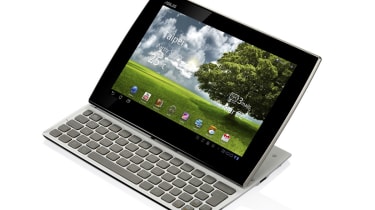 The Slider's keyboard is quite small, but one can get used to typing on it fairly quickly.

They keyboard's not entirely successful, though. While it's possible to get used to the small keys and their light touch, the spacebar is a bit annoying to use as the keyboard lip gets in the way. To avoid mistakes, you have to adjust your typing position slightly. Once we'd got used to the keyboard we found that we could type faster on this than using the on-screen soft keyboard, but not as fast as on the Transformer's larger keys.

Where the Slider wins out is in size for a tablet with an integrated keyboard. At 17mm deep, it's quite a bit thicker than a pure tablet, such as the Apple iPad 2 or Samsung Galaxy Tab 10.1, but it's narrower than the Transformer in docked mode.